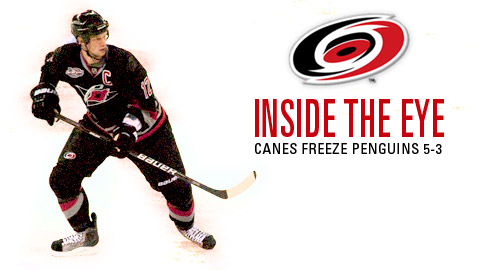 After losing the past 4 games, the Canes beat The Penguins 5-3 in an exciting game Saturday Nov. 12 at the RBC Center.

Skins and Finns Off and Running

The line of Jeff Skinner-Tuomo Ruutu-Jussi Jokinen were back together and they continue to be a great line to watch.

Early in the first, Tomas Kaberle passed to Jussi, who shuffled a pass to Skinner who shot a backhander off the post into the net from the slot about 12’ out.  A great way to start the game and get the home town crowd sensing tonight is the night.

One the other end of the ice, Cam Ward was amazing.  One great save after another.  Evgeni Malkin had to have nightmares after the game.  He took a team high 12 shots, yes – 12 shots by one player, many of which were sure goals against most netminders.

Malkin stole the puck from Brandon Sutter then went in uncontested but the shot was smothered by Ward.  Bryan Allen and Aaron Asham squared off in front of the penalty box right after a face off, each drawing 5 minute majors, but not before Allen got in a couple of good shots.

Ward made 2 unbelievable stops on one play: first a shot from the point by James Neal made it through then an unattended Steve Sullivan took a point blank shot that Ward brushed aside.  Pittsburgh was the top team in the league entering the game and that’s without Sidney Crosby.

They are a well coached team,  and the number of accurate one-timers in the first period alone was extremely high as no one is bashful about shooting.

Ward started off the second as he ended the first period making one great save after another. Most were one timers from far out with the defense having their hands full trying to clear the lanes.  The Canes were on the wrong side of a 5-on-3 power play but the defense pulled through.

There’s an old hockey superstition that if you survive a 5-on-3, you’re going to win the game.  In the case, the Canes believe in superstitions.  After a rebound off a save, Allen swept the puck to Sutter, who made a beautiful pass to Pat Dwyer for a breakaway all alone for a shot on Brent Johnson.  Give credit where its due as it was a nice save.   The teams exchanged pleasantries around the Canes net, forcing a face off to the left of Ward.  The Canes won the draw with the Skins and Finns line going up ice in good formation.  Skinner made a great move faking a shot but made a gift wrapped pass to Ruutu who tipped the puck home for a 2-0 Cane lead.

Late in the period, Skinner carried the puck into the zone with one then two defensemen on him.  The puck went into the corner with both Skinner and Ruutu digging for control.  The Penguins got control, but hit the skate of Penguin on the clearing pass.  Skinner may have said thank you to the Penguin as he jumped on the puck, turning towards the goal.  Matt Niskanen concentrated on nailing Skinner forgetting about the puck.  Skinner, in part a survival mode, part superstar mode, dropped the puck to Ruutu who made a nice shot for a 3-0 Cane lead.  Shots after 2: Canes 13 Penguins 23

Twenty seconds in the third, Eric Staal had a breakaway, scored a goal that was called off as the ref lost sight of the puck.  Only one person in the arena thought it wasn’t a goal and his opinion is the one that counts.  Redemption later in the period.

After that, the first half of the 3rd period brought back bad memories from the previous games.  Jordan Staal, left alone high in the slot, scored on a one-timer off the post from a good feed from Malkin.   Three minutes later on a Canes power play, Staal got a clearing pass, used his speed and fakes a wrist shot then sent a backhander in to cut the lead 3-2.

No question the momentum was changing.  At 12:18 Chris Kunitz has a snap shot from about 30’ out that I’m sure Ward would want another crack at.  A few minutes later, Chad LaRose had the puck inside the Penguins blue line, waited nicely for Staal coming down hard in the center, quickly passed back to LaRose who shot towards the net with Staal stuffing in the rebound.  Normally Staal would be giving one of his famous emotional yells, but on this goal, he simply pumped his fist with a serious look on his face.  No worries, there were well over 16,000 fans substituting for his excitement.

The last goal was set on a clear by Harrison to Staal on the Carolina blue line.  Staal had to have eyes in the back of his head as he made a pass to the tape of a rushing LaRose who put the game out of reach.  Shot totals: Canes 26,  Penguins 40 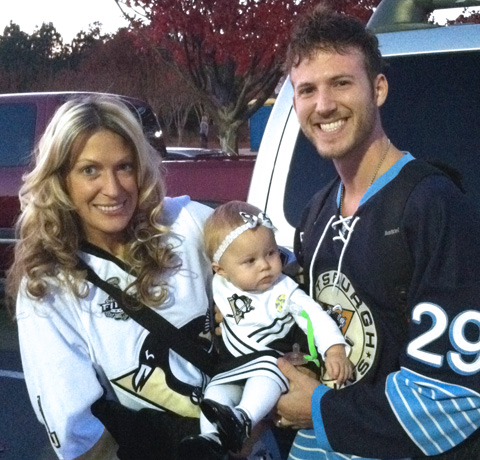 Tailgating before the game. Photo by Mark Ratcliff.