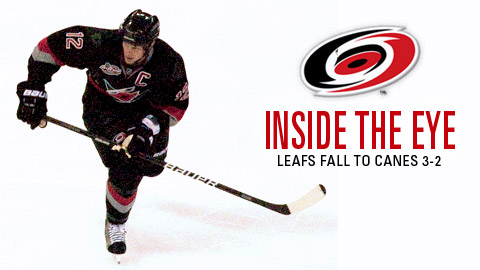 Cary-lina, NC – The Carolina Hurricanes hosted the Toronto Maple Leafs for a Sunday afternoon game on Nov. 20, 2011 for a must-win game for the Canes after going scoreless in the last 135 minutes.

With so many Carolina-Toronto player connections, it was somewhat of a “hey, watchya been doing lately” meeting.

Tomas Kaberle, Alexei Ponikarovsky, Juri Tlusti, Tim Brent and Jay Harrison all played for Toronto and we all know Coach Paul Maurice coached the Leafs and their minor league team, the Toronto Marlies.  Coaches Ron Francis, Glen Wesley and Tom Barrasso all played some forTorontoduring their careers.  Toronto is off to its best start in years led by All Star, and current league scoring leader, Phil Kessel, 14 g, 13 a.

The Leafs won the opening face off but good forechecking by the Brandon Sutter-Juri Tlusti-Pat Dwyer line forced a turnover in the Leafs end resulting in 2 early shots; one on net and one just wide.  Maurice shuffled lines as Eric Staal was teamed with Jeff Skinner and Tuomo Ruutu.  On paper, that’s a powerful line combination and it showed on the ice in the course of the game. The third line was Jussi Jokinen-Alexei Ponikarovsky.

Finally after being fouled by 3 different players in about 15 seconds including a high stick by goalie Ben Scrivens, Skinner drew a high sticking penalty.  The Canes are vying to drop one more in the power play rankings to dead last as they looked disorganized and didn’t get a shot off on the power play.

After a deflection off a skate, Cam Ward made a great stick save off Dave Steckel the middle of the slot that was pure reflex. An amazing save. The Canes kept the pressure in the Leafs end and had more puck possession time. Very late in the period, Staal won a face off back to Skinner whose shot rebounded off Scrivens toHarrisonon the left point.Harrisontook 2 strides to the face off circle and sent a wrister in for the Canes first goal in forever.  Shots after 1: Canes 10, Leafs 4

The Leafs opened the third with more offense in mind but Ward was sharp on a flurry of shots.  At the opposite end of the ice, on a weak dump in, Sutter out hustled the Leafs to the puck, made a great centering pass to Dwyer for a great scoring chance.  A little while later, on a play started by Justin Faulk, with a give and go between La Rose and Jokinen, Jussi had an apparent goal that didn’t count as the goal was knocked off its moorings after Ponikarovsky was pushed into the goal.   On the next face off, Skinner drew another penalty. With just seconds left in the Canes power play, Faulk made a cross ice pass to Jokinen who made a hard centering pass to LaRose right in front of the net.  Luke Schenn was coming hard to cover LaRose but the puck hit his skate and went in for a 2-0 lead.

With the teams finishing a 4 on 4, Sutter’s line had an unbelievable shift.  They forechecked, stole the puck, dug the puck in a scrum in the corner with Scrivens smartly froze the puck to stop play. Despite not scoring Staal was trying to make things happen.  On a rush he banked a pass off the boards to himself, completely frustrating Carl Gunnarsson who slashed Staal’s stick out of his hands.

Midway through the power play, Ruutu retaliated from constantly getting cross checked but got caught negating the man advantage.   Late in the period Jamie McBain made a sharp 90’ pass to Staal on the Leaf’s blue line, led Skinner on the left side who made a quick shot only to be outdone by an excellent save by Scrivens.  Great passing, great shot, but nothing to show for it.  Shots after 2: Canes 29, Leafs 12

The third started with the Canes on the back half of a power play but couldn’t convert.  After the power play ended, the Leafs came down the ice in good formation with Tim Connolly taking a shot from the right face off circle that Ward made a highlight glove save doing a pinwheel. It has to be an ESPN top ten save.

On a face off early in the period, La Rose took exception to Joe Colborne invading his space; cross checked him so Colborne returned a slashed as a thank you.  With both players out, Ponikarovsky took a bad elbowing penalty givingTorontoa 4 on 3.  Ward made several saves but Kessel stuffed one in on a rebound.   Later, Skinner outskated the Leafs on a soft dump in, was crunched against the boards but managed a laser pass to Staal for a deflection shot only to be stopped by Scrivens with an excellent save.

With a little of 6 minutes to play, Bryan Allen made a nice poke check, pushed the puck to center ice leading Staal who had a breakaway all alone on goal.  His snap wrister was stopped but Skinner smartly followed the play, picked up the rebound and lifted the puck to the upper right corner.

The celebration was worth the price of admission.  With 3:36 left in the game Kessel had an inadvertent high stick that gave the Canes one more power play. Knowing the short amount of time left, it looked more like the Leafs were on the power play as they pulled all stops. After the power play was over, the Leafs pulled the goalie and with 1 minute left, Kessel connected again to cut the lead 3-2.

The next 60 seconds were extremely exciting with the Leafs controlling the puck but the Canes held them off for a great win.

Canes Trivia:  Who is the Canes all time leader in penalty minutes?

Answer to “How many hat tricks does Hall of Famer Ron Francis have wearing a Carolina Hurricane sweater?” Zero.  He scored 9 as a Whaler but none in a Cane sweater.

Coping With Losses From Suicide During the Holidays