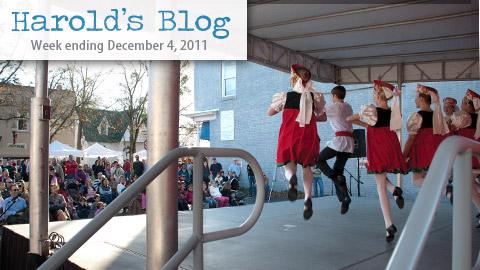 From the blog of Cary Mayor Harold Weinbrecht, covering the week through December 4, 2011. Photo of Old Time Winter Festival by Hal Goodtree.

Cary, NC – This week’s activities were comprised mostly of meetings and events.

Monday I was a “character education” reader at Northwoods Elementary. The county school system has a character trait each month and the schools focus activities around this character trait. This month’s character trait was courage. I read a fictional book to the entire fourth grade class based on courage. It was about a tiny girl in a Far East empire that saved the emperor, her father, from evil people. After reading I went and visited each class and answered questions. The students were a well behaved and an intelligent group of kids and I had a wonderful time. I hope to be invited back again soon.

On Tuesday I met with the town manager for our regularly scheduled meeting. Joining us was Scott Fogelman, Cary’s Budget Director, and Mayor Pro-Tem Robison. Our discussion centered on existing bonding authority and the potential for future bonding authority. Our current bonding authority, approved by voters in 2003, has not been completely used. It will expire in 2013. If we use that bonding authority it will probably require a tax increase. Unfortunately, many people were told by elected officials in 2003 (including me) that taxes would not go up if those bonds were approved. So I would have a difficult time supporting using that authority because it would increase taxes. On the other hand, we have close to $90 million in capital projects that are becoming more and more needed. Continuing to delay these projects could eventually result in levels of service to drop in Cary. So council will have tough decisions to make in the coming months on how to proceed with this bonding authority.

On Wednesday night my wife and I had dinner with a good friend and political ally. It was nice to have time to spend with friends.

Thursday started with a meeting about cell towers with an individual that wants them on town property.  He is interested in working with the town to place towers in prime locations. After the meeting I spoke briefly with town management about this and they are already working on moving in that direction. So we may start seeing cell towers on town property in the coming months.

Later that evening I joined council member Robinson for the Operations Committee. We had nine items on consent and two for discussion. The first discussion item was about a health program for town employees which the committee unanimously supported.

The second item was about what sidewalks to build with this year’s funding of $500,000. Each year sidewalks are prioritized based on a set of criteria and built based on funding appropriated. The remaining sidewalks on the list are to be evaluated during next year’s budget. Staff said that approximately 15 sidewalks are added to the list each year. The committee agreed with the staff on this year’s recommend for sidewalks. The recommendation included three sidewalks that were pulled off the sidewalk priority list because they involved more than just building sidewalks. In other words, they were significant capital projects. These were Jenks Carpenter Road from High House Road to Collins Road, Optimist Farm Road from Glade Hill Drive to entrance of West Lake Middle School, Widdington Lane from High House Road to Fawley Court. For these sidewalks to be built the council would have to add them to our capital projects list.

Thursday night my wife and I hosted several people to discuss retiring debt at our church. It is clear that debt is an issue that confronts us on every level.

Saturday morning I had the honor of giving welcoming comments for the 8th Annual Old Time Winter Festival in downtown Cary. I was joined by council member Frantz and Wake County Commissioner Portman who used to serve on our council. After my comments a group from Cary High School sang several holiday songs. They were outstanding.

Saturday night I had the privilege of leading the lighting of the Cary Christmas Tree.

There were several outstanding performances before we got to the tree lighting portion of the celebration. Before one rendition of Silent Night we were interrupted by a freight train and so we waited five minutes for it to pass while the emcees (characters George Baily and Clarence Odbody from ‘It’s a Wonderful Life’ adlibbed). Then a dance and song group, a few groups later, was interrupted by yet another freight train. The group took it in stride, kept dancing with the music, and waited for the train to pass.

There were several notables in the crowd including former mayors Booth and Ritter. Mayor Ritter told me that he brought in the first tree for the first tree lighting 24 years ago. I would like to know more about that event (hint to media that is reading my blog). The event was a great success and was well attended.

Information passed to me this week included a message from American Airlines announcing the bankruptcy filing. They assured us that no jobs would be lost at the Cary call center in MacGregor Park.

Emails this week included complaints about cell towers, garbage truck safety, the decision to renovate the Cary Theater downtown, lighting at the tennis center, landscaping at the McDonalds at Cary Glen and Green Level Church Road, and the cost of tying into the town’s sewer.

Next week will be much like this week with meetings and events. The week will be capped off by the Cary Christmas parade on Saturday.

Well that is all for this week. My next post will be on Sunday, December 11th. Please feel free to email me with a comment. Email all Town of Cary questions or comments to Harold.Weinbrecht@townofcary.org. Email personal comments to augustanat@mindspring.com.

Inside the Eye: Penguins Slip By Canes

8 Point Financial Checklist for the New Year
Scroll to top