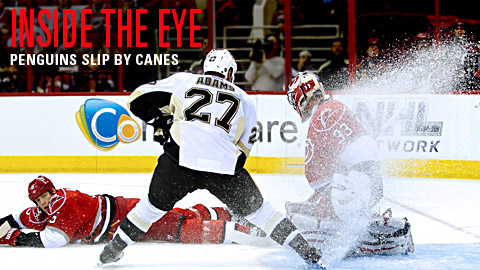 Story by Bob Fennel and photos by Tom Mousseau for CaryCitizen.

This is the seventh game for Sidney Crosby since returning from the concussion he suffered in January after a cheap shot in one game then a slam into the boards a couple of games later. He’s been on fire since his return, which is good for the NHL, while bad for the Canes.  Craig Adams, a former Cane on the Stanley Cup team returned to the RBC Center to have a great game against the Canes.

Rod Brind’Amour has been coaching faceoffs and several forwards have greatly improved in that area under his direction: Eric Staal, Brandon Sutter, Jussi Jokinen and Tuomo Ruutu to name a few.  Brind’Amour was fantastic at faceoffs during his career and now has been assigned to coach the power play. New coach John MacLean has taken over the penalty kill team. Both areas need to improve. 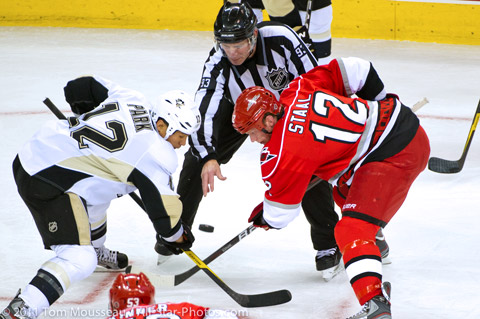 The first good scoring chance was when Staal touched the puck to Jeff Skinner, who centered to Ruutu for a quick shot. A few minutes later, Bryan Allen had a great pass to a rushing Jokinen only to be stopped by Brent Johnson.  Jokinen then picked up the puck in the corner, turned and made a crisp pass to Chad LaRose for a one timer but Johnson again had the save. Coach Kirk Muller has commented on how impressed he is with Staal’s overall game. Muller is right. Staal’s game is impressive, both on and off the puck.

Brian Boucher was in goal and his best save early on was when the Penguins came in 3 across over the blue line after Crosby settled the puck in center ice.   The Penguin forwards were given too much room allowing Chris Kunitz to carry the puck from the right wing to the high slot for a shot into traffic.  Boucher made a good save and the defense took are of the rebound. Pat Dwyer got called for holding with 3 seconds left in the period allowing Pittsburgh a new ice power play to start the second. 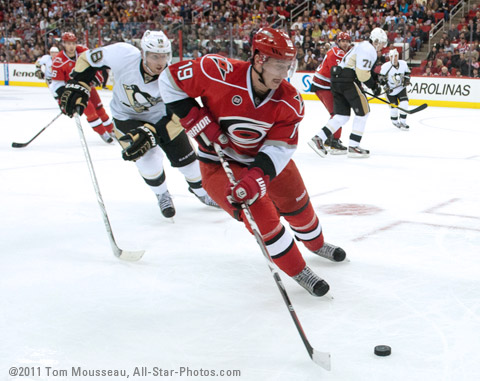 Dwyer is a very reliable on the penalty kill and with the Penguins power play 2nd overall in the NHL, the PK team had its work cut out.  Normally Staal is on PK but after the 11 shifts and most ice time for any Cane in the first, Muller had him rest until a faceoff was deep. The penalty ended without a decent shot by Pittsburgh.

Shortly after the penalty ended, Evgeni Malkin had a great lead pass as he crossed the blue line with speed.  He had a clean shot but Boucher was solid. At the other end, after a shot by La Rose went wide, the puck rode the boards, when the Penguins pick it up for a 4 on 2.  Allen made a wise sprawling block but the Canes couldn’t clear the puck.  Crosby pick-pocketed LaRose, made a quick turn, passed to Adams who banked the puck off the back of Boucher’s pad just inside the post for a 1-0 Penguin lead.

Later, Skinner was planted in front of the goal when Staal took either a shot or had a pass to Skinner.  The puck was bouncing and Skinner couldn’t get it settled as he swatted at it 3 times. In frustration, he slammed the side of the net and carried his frustration to the bench slamming the door.

On his next shift, Skinner wanted to make up for the missed shot as he was all over the ice. He was on the off wing in the defensive zone and took the puck away from Richard Park.  Park wouldn’t let Skinner alone up the ice, probably asking ‘how in the hell did you do that’ as he slashed Skinner and got caught.  Before the whistle blew, the Canes had the puck in the Penguins end.  Smart play by Staal, Skinner and Stewart as all went to the net for traffic. Pitkanen controlled the puck, made a cross ice pass to Jamie McBain on the left point who let a one-timer slap shot through the traffic into the net. 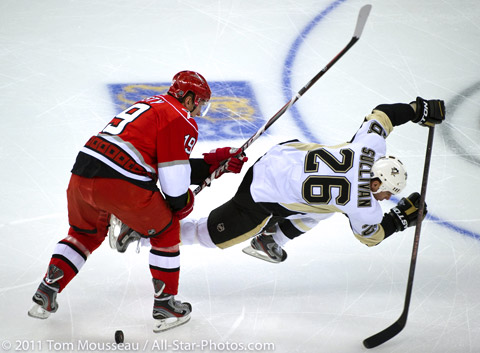 The Power Play – Finally a Score!

The Penguins were gunning early in the 3rd as they had 5 shots in 3 minutes putting the Canes on their heels.  Coach Muller was talking it up on the bench and something must have sunk in as the Canes started doing a great job of forechecking.

Watching Staal play against his brother Jordan is fun to watch.  When there was a scrum, they grabbed, more like man hug, each other away from the rest of everyone on the ice.  Their mom and dad were in attendance so that answers the question, who do you listen to: your mother or your coach?

Brotherly love ends when the puck is dropped as both are great professionals.   After a slow line change by the Canes, Pittsburgh took the puck to the Canes end. Adams passed the puck to Aaron Asham who used Tomas Kaberle as a screen and scored from 35’ out. 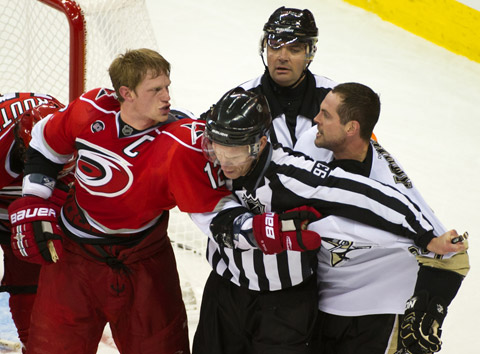 A few minutes later, Jordan Staal and Ruutu resembled knights jousting and each got 2 minutes in the penalty box to remind them they were hockey players. On the 4 on 4, Pittsburgh went big and skilled with 6’3: Malkin and 6’1” Pascal Dupuis.  The Canes went with 5’10” LaRose and 5’11” Jokinen.  Dupuis scored, ‘nuff said.

A minute later, the Canes went on a power play.  Initially it started out slow but picked up as Jokinen passed to Dwyer who had a hard backhander.  McBain came charging form the left point to put in the rebound.   With 4:27 left, there was another scrum in front of Boucher.  With the puck loose and bodies flying, Chris Kunitz scored while falling down. Boucher immediately protested about goalie interference, the officials huddled and agreed: No goal! Much to the delight of most of the nearly 17000 fans in attendance.  With 2:26 left, the Canes had a break: “Too Many Men” by Pittsburgh. Twenty-two seconds later Dupuis tackled Staal for a 2 man advantage.  Then Matt Cooke tripped Staal guaranteeing the Canes would have a power play in overtime if they scored.  Problem was: they didn’t.

Trivia: What Hurricane has the most consecutive games with an assist? 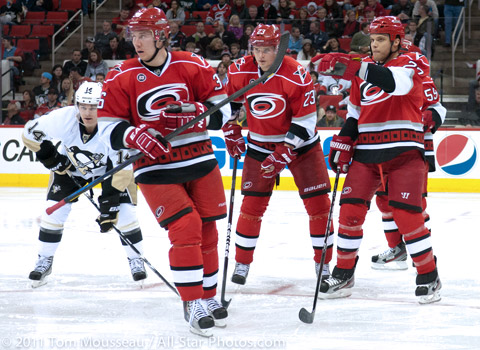