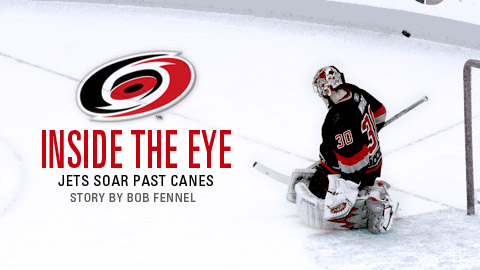 Story by Bob Fennel and file photo of Cam Ward by Hal Goodtree.

Cary-lina, NC –  The Carolina Hurricanes lost to the Winnipeg Jets 4-2 in their 3rd game of a 4 game Canadian road trip on Friday.  While the score wasn’t good, there were some good things that happened during the games and during the day.

Down Early, Ward Speaks Out

The Canes dug a hole early in the first as Dustin Byfuglien scored from behind the goal line on a shot banked off the backside of Cam Ward’s leg only 34 seconds into the game.  The Canes just couldn’t get the puck out of their defensive end and the Jets seemed to have the quicker team and capitalized on aggressive forechecking.

About 5 minutes later on a dump in by the Jets, Ward came out and shuffled the puck half way up the side board.  The Jets, again quicker to the puck, kept the puck down low.  Blake Wheeler made a pass to Evander Kane at the left point then made a routine shot on net.  Jamie McBain couldn’t clear his man in front of Ward and the puck found its way in the goal.   You could just about hear  normally cool, calm and collected, Ward speak his mind about what wasn’t happening in front of him.

The Canes did buckle down after that with Ward making some key saves as the Jets pounded out 19 shots compared to the Canes 7 in the first period.

In a Deeper Hole

The Canes got in penalty trouble in the second.  Some because of obvious infractions, some because of questionable calls and some by mouthing off.

If you’re going to get a penalty, for the good of the fans, nail someone just about to take a shot; not for telling the ref to do something physically impossible.

Chad LaRose got called for cross checking, then 23 seconds later Bryan Allen got called for elbowing on a perfect body check.  A minute later, the Jets got called for a make-up, a call for goalie interference but a half a minute later Justin Faulk got called for an ever so slight hook giving the Jets what seemed like a 5-3 forever.  In the next 2 minutes, the Jets put in 2 power play goals for a 4-0 lead then went into a turtle shell defense.

Ward was pulled and rookie Mike Murphy went in.  When Ward got to the bench, he unloaded: kicked the door, slammed his stick and yelled, hopefully words of what needed to be done, to his teammates.

With the Jets obviously wanting to play only defense to protect the win, the Canes finally woke up offensively.  Giving credit where it’s due, the Canes started to play some aggressive hockey.

After a few minutes of up and down hockey, Staal brought the puck into the Jets zone, made a good cross ice pass to newly acquired Spacek, who passed to Faulk.  Faulk skated along the blue line and took a long snap wrister into traffic with Jiri Tlusty and Pat Dwyer in front. The puck hit a Jets’ defenseman’s stick and found the back of the net for 19-year-old, Justin Faulk’s first NHL goal.

A few minutes later, the Canes aggressiveness forced a Jets hooking penalty.  The second power play unit was on the ice and looking very good.  The passing was impressive.  Dwyer passed to Spacek at the center of the blue line. Calmly he passed to Tim Gleason along the boards who made a fantastic pass to Brandon Sutter beautifully planted in the slot with his stick angled towards the net.  Gleason read that and made a hard pass that went as planned for a power play goal.

Gleason was a goal short of a Gordie Howe Hat Trick (a goal, an assist and a fight).   For those that watched the game, my first star of the game was the Fox Sports cameraman for all the footage of the Canes bench and first row of fans.

Trivia: What is the most goals scored by a Cane in a game?
Answer to: What Hurricane has the most consecutive games with an assist? Rod Brind’Amour and Matt Cullen, 8 games each

Editorial: Just Say No to Fracking in Cary