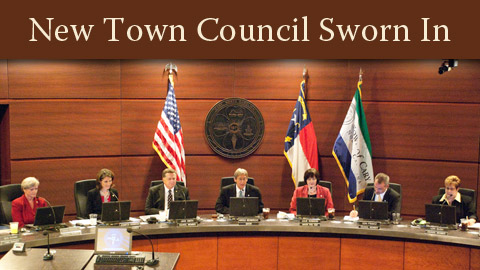 Cary, NC – On Thursday evening last week, a new Cary Town Council was sworn in. It was a night of celebration and seriousness, with several newsworthy items that will be of importance in 2012.

The evening began with an elected officials reception for family and guests at Page Walker.

All the members of Town Council and their families were there. I talked to Gale Adcock’s Mom about her cookie recipes and with The Chiefs (Fire Chief Allan Cain and Police Chief Pat Bazemore) about the Cary Christmas Parade the week before.

Town Manager Ben Shivar, Council Member Jennifer Robinson and Public Works Director Scott Hecht answered some questions I had about an employee incentive wellness program for Town staff. I had a chance to photograph Mayors Past and Present. 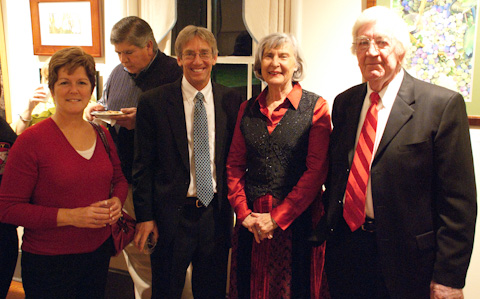 The swearing-in took place in Town Council Chambers in Town Hall. Jennifer Robinson explained to me that only those members newly elected (or re-elected) are sworn in. A Council member’s oath lasts for their full term.

Four members were sworn in on Thursday. Each took their turn on the floor of the Council Chamber, their family gathered around them, to receive the Oath of Office. 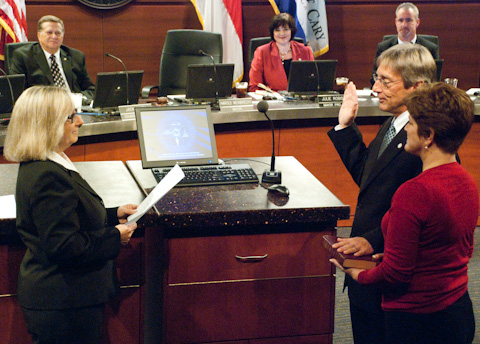 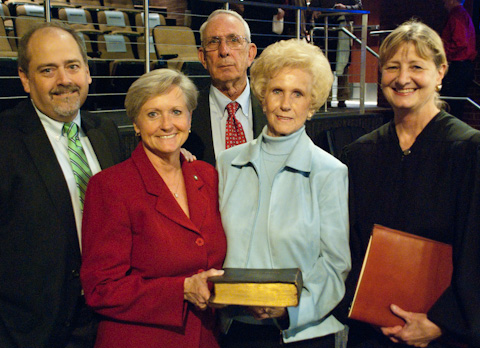 Don and Lisa Frantz with their family after Don was sworn in for a second term. 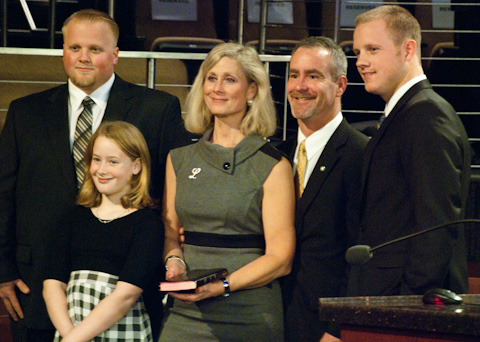 Lori Bush took the oath in front of her mother and daughter. Lori’s left hand is on a Torah, a Jewish ceremonial scroll that contains the first five books of the Old Testament. 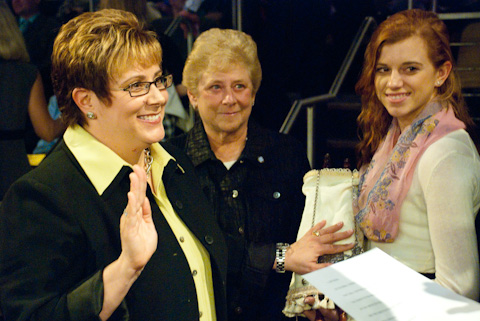 After the swearing-in, one of the first orders of business was designating a new Mayor Pro Tem.

Pro Tem (from the Latin Pro Tempore) means “for a time.” The Mayor Pro Tem is a Council member who stands in for the Mayor from time to time and as necessity dictates.

Gale Adcock was elected Mayor Pro Tem, replacing Julie Robison who had served in that capacity for the previous four years.

Thursday night marked the beginning of the first female-majority Town Council in the history of Cary.

Members of the new Town Council are:

Another interesting order of business was a request by the new Town Council for staff to investigate the potential impacts of hydraulic fracturing, or fracking, a process to extract gas and oil from shale deposits a few hundred feet below the ground.

Lori Bush, in her first initiative as a Town Council member, made the proposal. It passed by a vote of 5-2.

Town Manager Ben Shivar got up to introduce the Town of Cary Employee of the Year. Officer Tony Menendez of the Cary Police Department was this year’s recipient.

This is Officer Menendez moments after being recognized with his wife and brother plus Cary Police Chief Pat Bazemore. More on Tony in a future issue of CaryCitizen. 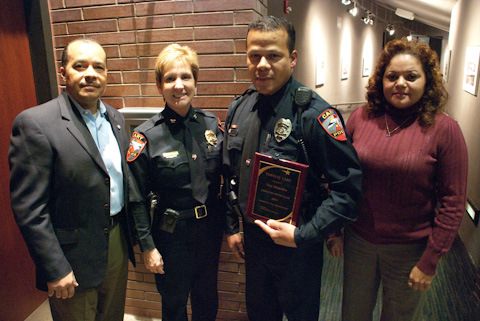 Education: A STEM Stocking Stuffer with a Story