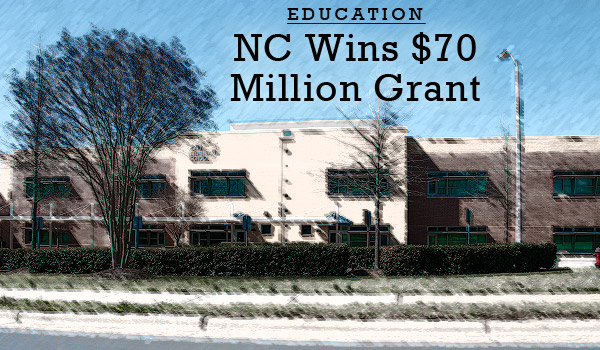 Story and photo of Cary Elementary by Hal Goodtree.

Cary, NC – Lost in the hoopla of the holidays was this bright note: North Carolina won a $69.9 million grant from the U.S. Department of Education.

The grant awarded to NC is called Race to the Top – Early Learning Challenge, or RTT-ELC.  From the U.S. Dept of Education:

Awards in Race to the Top will go to States that are leading the way with ambitious yet achievable plans for implementing coherent, compelling, and comprehensive early learning education reform. – Race to the Top Early Learning Challenge

35 states, the District of Columbia and Puerto Rico submitted applications. Only 9 applicants received awards. And only Ohio won a larger grant than North Carolina (by about $2000).

North Carolina will use the Race to the Top money to increase training for early-education workers, expand health care for young children whose families may be doing without, focus improvement efforts in impoverished northeastern North Carolina counties and better integrate the state’s early-learning services. – Associated Press

The grant is a great boon to North Carolina, but it falls squarely in the middle of a fight between Governor Bev Perdue and the NC General Assembly over funding for Pre-K education.

The Governor says the grant cannot be used to pay for services the state is legally obligated to pay. It can only be used in addition to such obligations. Superior Court Judge Howard Manning agrees. The General Assembly does not.

State attorneys are busy filing briefs and it’s still too early to tell what kind of impact the RTT-ELC grant will have in North Carolina. But the award is a good win for the state.

Panthers Year in Review: Plenty to Cheer About

Downtown Cary This Week: Shivar at HoCA on Thursday
Scroll to top