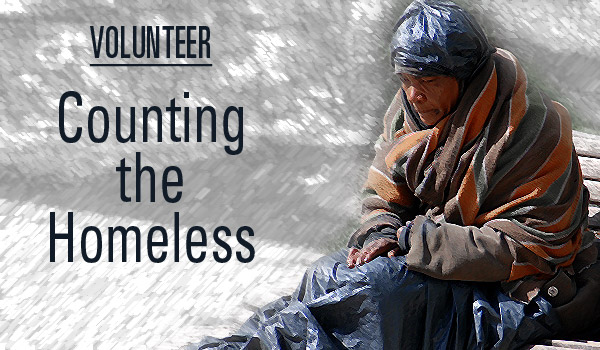 Story by Jennifer Bosk, United Way of the Triangle. Photo by Raging Wire.

Cary, NC – On any given night, 2,000 people in the Triangle are homeless.  From January 21st – 27th, more than 150 volunteers will take to the streets and homeless shelters in the Triangle to survey and identify our most vulnerable homeless individuals and families.

Living on the Streets = Deadly

The information collected during this time will be used to create a by-name registry that will serve to prioritize those homeless individuals who have been living on the streets the longest and quickly move them into permanent housing.

Living on the streets long-term is deadly. Studies show that chronically homeless people are more vulnerable and succumb to preventable illnesses two to three times more than the general population.  Last year, 40 homeless people died here in the Triangle.

United Way of the Greater Triangle is participating in the 100K Homes Campaign (www.100khomes.org), a national three-year program aimed at housing 100,000 vulnerable, homeless individuals and families by 2013.  The 100,000 Homes Campaign, launched by Common Ground, brings together change agents from across the country to find homes for 100,000 of the most vulnerable and long-term homeless individuals and families by 2013. It is designed to fundamentally alter our response to chronic homelessness by giving communities concrete tools and connecting the change agents with one another so no one has to innovate alone. To date, approximately 34 U.S. cities including New York, Detroit, and Fort Worth have pledged to support the campaign. More than 11,225 individuals have been permanently housed since late 2009.

People interested in being part of the 100,000 Homes Campaign can volunteer in various areas:

You will be part of a team of people led by experienced outreach workers to canvass the streets and shelters administering surveys to homeless people.  Surveyors will be needed for both early morning (4am-7am) canvassing as well as daytime and evening canvassing in the shelters (4pm-9pm).  Location:  county specific (please identify which county you would like to be located in).

You will be entering completed surveys into our data base.  Location:  you will be located at United Way of the Greater Triangle’s offices in RTP.

Education: Yang Wants To Be a Mathematician
Scroll to top