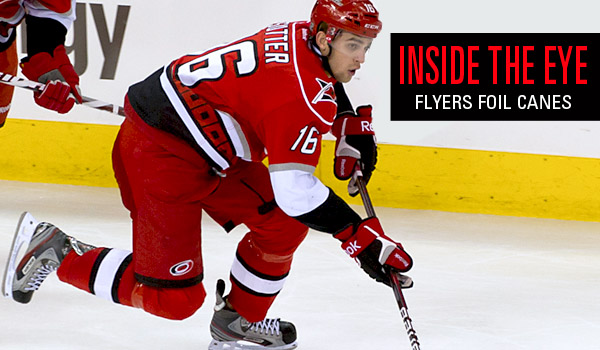 Cary-lina, NC – The Carolina Hurricanes failed to even up the season series when the Philadelphia Flyers won a hard-fought battle 2-1, at the RBC Center January 10, 2012.

Early in the first, both teams had power plays that were killed. Canes forwards were quick on the coverage up top and the defense was clearing the lanes for Cam Ward.

Jerome Samson was called up earlier in the day and was playing in his first NHL game of the season in place of Chad LaRose who was out with an upper body injury. Samson is a sharpshooter and leads the Checkers with 15 goals in the AHL.

I almost got scolded again.  I yelled “offsides on the Flyers!” about 4 seconds before the linesman called it.  The Flyers’ radio crew sat behind me and gave me “the Philly glare”’!

One little play that won’t make the score sheet and can only be appreciated in person was when the Flyers were pressing in the Canes’ end.  The puck went into the corner with Bryan Allen and 3 Flyers. Allen won the puck and rather than blast it out for a probable icing, he calmly baited two passes, up ice and around the net, having the Flyers bite on both allowing a simple pass to Jussi Jokinen for the clear.   It could have been Allen’s 6’5” presence who was one of the few Canes big enough to go against the Flyers.   Anthony Stewart had another power move late in the period up the left wing, dumping a sugar-coated pass in the Flyers crease but no Cane was home to knock it in.    Shots after 1: Canes 11, Flyers 9

During the Canes first power play in the second, the Flyers had an odd man rush that had goal written all over it but Cam Ward made an unbelievable blocker save.  Shortly after the Canes power play ended, the Flyers had speed going into the Canes end.  Ward made the initial pad save against Wayne Simmonds but weak coverage allowed Brayden Schenn for an easy goal on the rebound.  Jaroslav Spacek immediately went down when the puck hit his  head. Fortunately he went off on his own but it put him out for the rest of the game.  The Canes won the following faceoff (thank you coach Rod Brind’Amour). Jokenin passed up to Samson who carried the puck over the Flyer blue line. Kimmo Timonen interfered as Samson tried to go around resulting in a Canes power play.

The Canes won the face off again, a quick shot by Eric Staal, another by Justin Faulk with that rebound going to a perfectly positioned Samson for his first NHL career goal after only 9 seconds into the man advantage.  Late in the period after Ward froze the puck, Tim Gleason made sure the Flyers heard the whistle as he helped the folks in the first row get a good look that Schenn’s sweater against the glass.  Schenn went to the box as he thought he had a penalty (so did the crowd) but was pleasantly surprised when the ref said he was a free man. Shots after 2: Canes 22, Flyers 27

On a play that looked innocent, Sean Couturier took a snap wrister from the face-off circle that found the upper corner over Ward’s right shoulder that I’m sure Ward would want another crack at.  He stops those 99 times out of 100 and was visibly upset after the goal.  Even though that goal was scored early in the period, the Canes started pressing a little bit more which was fine by me.

Only the Columbus Blue Jackets, who fired their coach earlier in the day, have a goals for/against differential greater than the Canes.

The Canes have had 34 more goals scored against them than they’ve scored.  The Canes need more offense and that should lead to more goals.  Philly has scored 16 more goals than scored against them meaning that’s a 50 goal swing as compared to the Canes.  Going back to Hockey math lessons, the Canes have played 44 games, add just 1 goal per game, not even the full 50, and this team is one of the top teams in the league.  Staal needs support on the wings or put him at a wing with a strong center.

The Canes also miss Jeff Skinner and word has it he’ll be back soon.  While LaRose is an energy player, the Canes didn’t skip a beat with Samson in there.  Everyone looked quick, especially Tuomo Ruutu.  Jay Harrison made a great sweep check in center ice with the puck going right to Ruutu’s stick.  Ruutu carried the puck into the Flyer’s end feeding Staal for a hard one timer from the left face off circle that Sergei Bobrovsky made a desperate toe save.  It was noticeable that coach Kirk Muller initially put mostly larger forwards on the ice when he pulled Ward with 1:30 to play.

Overall, it was a hard-fought game and if they put the same effort for a full 60 minutes every game while generating more offense, they should be fine.  Game shot totals: Canes 36, Flyers 37

Adoption and Parenting Session at St. Michael’s
Scroll to top