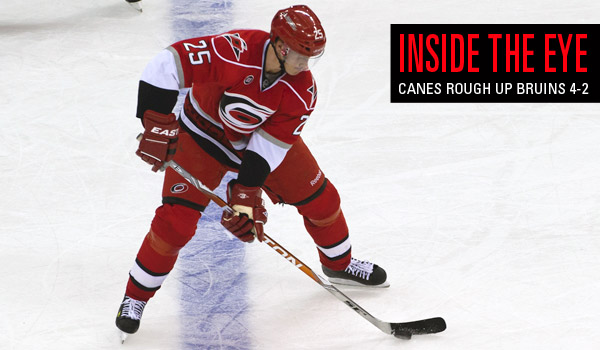 Cary-lina, NC – The Carolina Hurricanes had an impressive come from behind victory over the Boston Bruins in front of a sellout crowd at the RBC Center Saturday, January 14th.

Boston had it over Carolina in every statistical category: they’re right with the Rangers for top in the conference, the Canes are last; every player on the Bruins is on the + side for the +/- goal differential ( a guide at best)whereas the Canes have 3 players on the + side; the Bruins have scored 71 more goals than scored against them, the Canes have 32 fewer goals than opposing teams (meaning a whopping 103 goal differential head-to-head); even with injuries Boston has the advantage.  They had one key (and the key word is key) player out, while the Canes have 2, Jeff Skinner and Joni Pitkanen.

The first period was well played by both teams.  I’d call it conservative play as neither team really had any severe scoring threats nor gutsy plays, just excellent forechecking with much of the action between the blue lines.

Both Cam Ward and Tim Thomas were sharp making key saves with Ward having more action.  Boston appeared to have about a half step on the Canes early in the game but the Canes showed some grit as they were winning a majority of the pucks along the boards and in the corners.

Eric Staal got called for elbowing when it appeared all he was trying to do was ‘gently’ untangle a Bruins’ arm from around his neck.  Staal is an important part of the penalty kill team but the units on ice did a great job.

Pat Dwyer and Brandon Sutter were exceptional.  On one play, Dwyer back checked a Bruin just as he was about to shoot into traffic from the faceoff circle. Dwyer got the puck up to Sutter who ragged more time off the penalty.

With the Bruins being the defending Stanley Cup champions and with the season they are now having, their fans came out in force.  When they started to chant ‘Let’s Go Bruins’, the Caniacs drowned them with ‘Let’s Go Canes’.  Most everyone joined in a Bronx cheer when one idiot wearing a Bruin sweater made an obscene gesture while being shown on the Jumbotron.  A few other idiots, all wearing Bruins gear cheered.  If Ray Bourque was still playing, he would have climb the stands and ripped an appendage off the jerk.   Shots After 1: Canes 6 , Bruins 11

Ward made a pad save off a hard shot by Johnny Boychuk .  The rebound came out about 10’ with  Patrice Bergeron rushing in to slapped it home.  Ward was defenseless on the play and I’m sure the defense will use that as a teaching lesson for tighter checking until a whistle blows.

The Canes didn’t fold and appeared to get more aggressive.  On what looked like a clear by the Bruins in their end, Sutter pick pocketed  Gregory Campbell with a great steal, took a few strides to the center just inside the blue line then let one fly.  The replays showed it hit nearly everything along the way: a Bruin defender, a stick, Dwyer’s skate, 2 posts then into the net.   The way Sutter and Dwyer have been playing, it was nice to see them rewarded.  Shots after 2: Canes 14, Bruins 23

Karma for the Canes

Another category the Bruins have it over the Canes is 3rd period goals.  They’ve scored 37 more goals in the 3rd period than opponents.  Don’t even ask about the Canes as earlier in the season, and in the preseason, the 3rd period killed them.  Tonight would be a different night.

Early in the period, the Bruins stuck again. After several rugged plays by Bryan Allen, the Bruins kept the pressure on and came up with the puck.  Ward made a save on a shot from the slot off David Krejic with Milan Lucic snaring the rebound at the faceoff circle to Ward’s left.  Lucic looked up to see where Ward was, then got off a very nice shot to the far side.

In games past, that type of goal and at that time of the game, the Canes may have mentally shut down. Instead they became aggressive and it paid off.

With the puck in the Bruins zone,  Tim Brent found Justin Faulk open on the right point.  Faulk was having another excellent game on defense and was doing all those things that don’t get headlines but mean so much.  Faulk drove home a slap shot that had Thomas first just stare at Faulk then sweep the puck to the boards in disgust.   Jay ‘Harry’ Harrison was having another solid game.

Harry and Faulk are not only line mates but room mates on the road. Harry is a good guitar player so who knows, maybe he can get Faulk to sing (it’s not unusual to get rookies to do some stranger things).  Harry stopped a clear then like his line mate let go a shot from the left point into traffic.   Jiri Tlusty paid the price that forwards need to pay for team success as he was hammered by standing his ground when Harry let loose a slap shot from the left point. With bodies flying left and right and Jussi Jokinen jumping over the puck, it went straight in the net for the Canes lead.

Hockey isn’t a gentleman’s game and with just a couple of minutes left, Lucic tried to get Bryan Allen, who is sporting a broken nose from 2 games ago, into a fight.  Allen won’t back down from anyone but fortunately Tim Gleason was there to remind Lucic of hockey etiquette.

Thomas was pulled for the extra skater and Boston was pressing.  The Canes got a clear and Staal out skated Zdeno Chara and Andrew Ference to the puck.  He quickly got the puck from his skate to his stick then took aim for the middle of the net.  With a game like he and the rest of the Canes had, it was pure Karma as the Caniac nation was earning it’s reputation for the loudest house in the NHL. Shots totals: Canes 21, Bruins 35