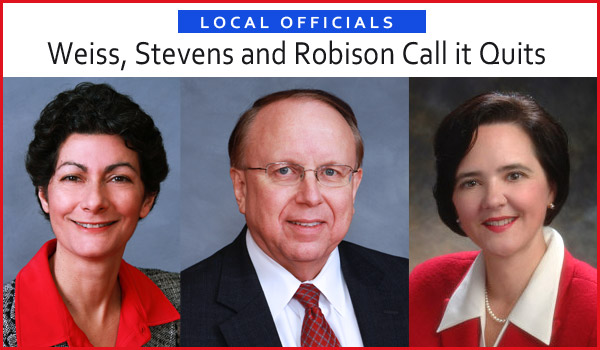 Cary, NC – Holding elected office is a privilege but also a burden. In the last few weeks, three local officials have announced they are leaving office.

At the January meeting of Cary Town Council, Julie Robison (At-Large member) announced she will be leaving office at the end of June. Julie’s husband, a professor and dean at NCSU, has accepted a job at West Virginia University. Cary Town Council is nominally non-partisan.

Last week, State Representative Jennifer Weiss (D) released news that she will not run for re-election in District 35, serving parts of Raleigh and Cary. Redistricting has altered electoral boundaries statewide. Weiss would be in District 41 along with incumbent Tom Murry.

Weiss made no mention of Rep. Murry or redistricting in her statement, saying “This has been a difficult decision for me but I feel that it is time for me to take a break from politics, pursue some of my other interests and spend more time with my family and friends.”

Finally, Richard Stevens (R) announced that he is leaving the North Carolina Senate at the end of this year after ten years of service. Stevens was formerly Wake County manager. He is co-chairman of the NC Senate Appropriations Committee.

All three live in Cary.

Harold’s Blog: Table Tennis, No Special Treatment For Me and Chickens