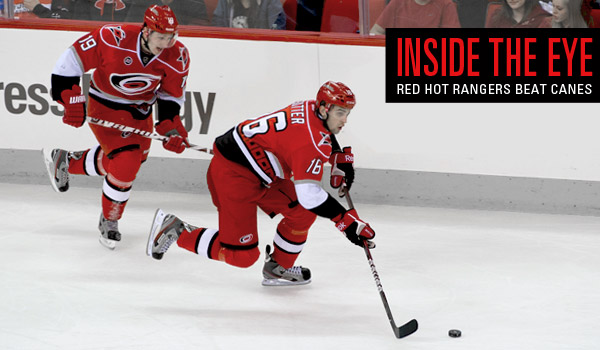 The Canes have nothing to be ashamed of as they played one of the strongest teams, not only by their record but by the many large bodies on the Rangers. The way the Rangers are playing, and what they’ve added this past week, they have a very good chance to represent the Eastern Conference in the finals.

Eric Staal earned every second of a slashing penalty when he chopped Ruslan Fedotenko’s stick in half early in the first period. Despite the strength on the Rangers in many categories, they’re near the bottom of the NHL on the power play, but give the Canes defense credit.  They covered the front very well and there weren’t any real strong scoring chances.

Both teams played man to man defense so much it looked like an ACC basketball game.  The forwards were on defensemen so close that numerous shots were deflected into the netting.  The Canes mixed up their forward lines due to injuries and just trying to match up with the Rangers.   Staal had Anthony Stewart and Jiri Tlusty, Brandon Sutter’s line had Derek Joslin and Andreas Nodl.

Jeff Skinner’s line was all speed with Jussi Jokinen and Zach Boychuk.  Later in the period Brandon Dubinsky took a stupid penalty when he threw Tlusty’s stick against the glass for an unsportsman conduct call, after Tlusty was wrestled to the ice by Brian Boyle.

The Canes started the second with nearly a minute and a half left on the power play.  Justin Faulk sent the puck behind the net to Staal, who calmly carried the puck around the net to the right faceoff circle.  Skinner was perfectly positioned with his stick cocked ready to let one fly. Staal sent the pass to Skinner who had to quickly settle the puck then sent a rocket five-hole for a 1-0 Cane lead.

Sutter’s line is the checking line but they got off several very good shots with key saves by Martin Biron. Midway in the period, the rangers were clearing the zone with Faulk pinching at the blue line but got tangled, maybe held, by  Derek Stepan.  That allowed All Star Marian Gaborik to bring the puck in the Canes end and left a nice drop pass to Artem Anisomov who sent a great looking one timer high glove side to knot the score 1-1.

The Rangers scored about 6 minutes later on a breakdown on man coverage .  First the Canes tried to clear the puck around the boards but never made it out.  The Rangers took the puck straight to the net with Cam Ward making the initial save but Gaborik, left untouched, was there to shove the loose change in for a 2-1 lead.

The men in stripes got in the action early in the third as a ref blocked a clear in the corner to the right of Ward, then a minute later Jaroslav Spacek  sent a hard dump-in shot that hit a linesman so hard it sent him reeling.  That allowed Fedotenko to pick up the puck and hit Boyle in stride.  Boyle quickly brought the puck in the Canes end for a 2 on 1, slipped a pass over to Brandon Prust who had just about an open net and didn’t miss for what turned out to be the game winner.

With a little over 5 minutes remaining, Jay Harrison was cut with a high stick and had to go to the locker room for repairs.  The Canes pulled Ward late in power play for a sixth attacker but couldn’t put one in.   The Rangers sent 2 forwards up ice when the puck was cleared but the Canes covered well, not allowing for an open netter.  Ward came back on the ice after the power play ended.

The Canes still had fire in their bellies and were pressing.  After Ward made an excellent save on Gaborik, the Canes went on the attack again.  With the puck behind the Rangers goal, Tlusty sent the puck up to Faulk on the right point.  Faulk pass to Drayson Bowman on the mid boards, sending the puck back to Staal behind the net.  Staal tried a stuff, Tlusty pushed the puck away from Biron where Harrison was for a whack at the puck that found the back of the net.

Ward came off for the last 40 seconds but the Canes ran out of time against a very good team.