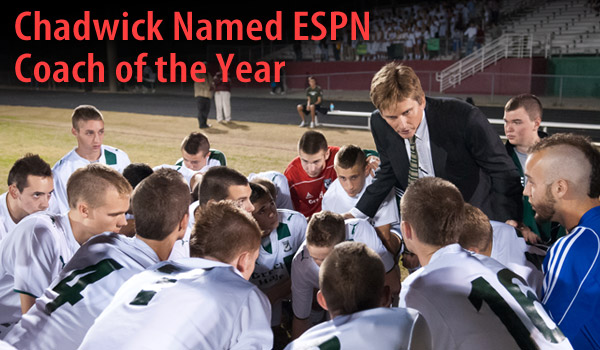 We asked Coach Chadwick about his reaction to the award. Did he know he was a candidate?

“No,” said the Coach, “I did not know about the award until ESPN emailed me. I was very surprised. I did not [even] know I was in the running.”

He continued, “To be named the High School coach of the year for the entire country is amazing and I’m so honored. To me, it speaks to the quality of our players and the program we built at Green Hope.”

“Every year, we had kids move to Cary to play for Green Hope and that is one of the most rewarding things to me, that kids wanted to move to play for us.”

We asked Coach Chadwick about his keys to success.

“When I started in 2002, I had a very talented team, we did very well winning 22 games and losing 2, but we lost to Millbrook in the 3rd round of states. I was gutted, just like the team.”

The coach continued, “I was a good player, know the game, work hard and have  passion, but I wasn’t a very good coach, so I got educated. I spent every summer of the next 4 years progressing through the National soccer licensing program, D, C, B and finally the A license. There are less than 1,250 coaches in the U.S. with an A license.”

“I continued to work hard, experiment with teams, stayed passionate and studied the game. I can’t watch Manchester United or Barcelona and enjoy the game as a fan, I’m trying to figure out the purpose behind every action.”

“After every loss, even though it was just high school, I would not sleep well, I’d be up at 2 AM watching videos of the loss or making notes. My wife thought I was crazy.”

Next for Coach Chadwick?

Coach Chadwick announced last fall his plan to retire at the end of 2011 soccer season.

We asked him about his dreams for the future. Sports writer? Turn pro?

The Coach responded, “I will be an overqualified  recreational soccer coach for my daughter’s 6 year old team :-). One day, maybe I’ll return to high school or college coaching. Now it is time to coach my own kids in sports and in life.”

It’s a sure bet that if ESPN has a rec coach of the year, Andrew Chadwick will be in the running.