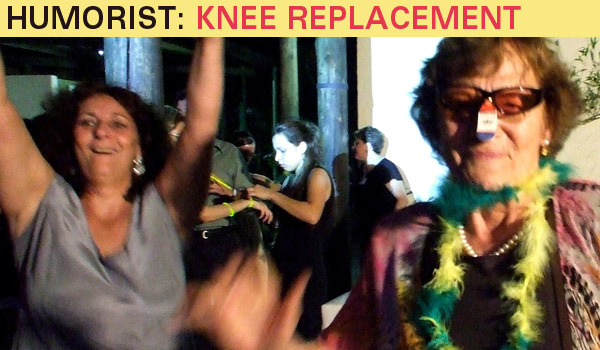 Cary, NC – My mom recently got a new knee. I think the old one clashed with her drapes. It also wasn’t working very well anymore. It had become very unstable and gave her the kind of intense pain you would only expect after being shot with a nail gun.

It is difficult when body parts malfunction because they tend to never have any kind of warranty coverage. And no matter how justified your complaint is, it can be somewhat complicated to sue the manufacturer. Although you can probably find a lawyer willing to try. “Shortly after filing a lawsuit against God, Mr. Smith’s attorney was killed by a train. What is unusual is that the lawyer was nowhere near a railroad at the time.”

One interesting point that I learned about knee replacement surgery is they now have different artificial knees for each gender. This makes me worry that there is an insult waiting for me down the road. “Mr. Cohen, we’ve decided that you are not masculine enough to warrant the male knee. Thus we are going to give you the female knee. In fact, it is one designed for a twelve-year-old girl.”

The artificial knees are sometimes made of plastic. “Parts of Uncle Phil are recyclable. When he dies, we can just put him in one of the bins at the curb.” Most likely they are made of a very strong plastic and not the kind they make plastic utensils out of, which tend to break under the weight of anything heavier than powdered sugar.

One website that explained the surgery said that the artificial joint is attached to the shin and thigh bone with “cement or a special material”. I worry that “special material” is just their euphemism for Scotch tape. It is like when a fast food restaurant says that their burgers come with “special sauce”, which then turns out to be Thousand Island dressing or floor wax.

In the end all that matters, though, is that my mom has a knee that is sturdy, does not give her any pain, and goes well with her drapes.