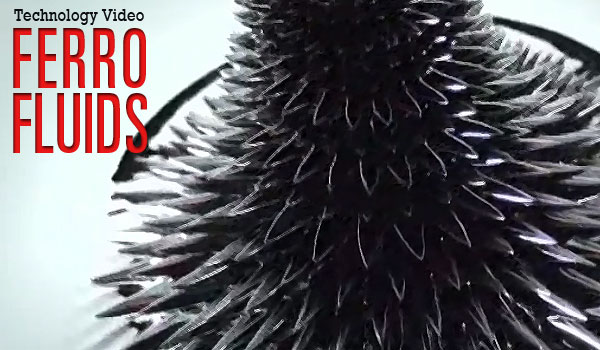 Cary, NC – This week, our S.T.E.M. (science, technology, engineering and math) video series gives robots a rest and examines ferrofluids, fascinatingly magnetic liquids. Kids of all ages will find this one interesting and inspiring.

Ferrofluids contain a derivative of iron suspended in a liquid. The particles of iron are so small (less than 10 nanometers) that they avoid clumping together and precipitating out of solution.

However, the nanoparticles of iron (usually magnetite of hematite) respond strongly to a magnetic field. The liquid seems to spontaneously extrude strange shapes, like a cross between Christmas trees and crystals. If you’ve seen the Terminator movie series, you may remember the liquid Terminator guy, an improbable but fascinating  visualization of ferrfkuids.

In real life, ferrofluids are used to coat the spinning hard disks in our computers. A thin layer of ferrofluid is used to coat the rotating shafts of hard drives, held in place by magnets, sealing the disk from any debris. Ferrofluids are also used mechanical engineering (as a friction reducer), medicine (as a contrast agent for MRIs) and even auio (as a heat-transfer agent surrounding speaker coils).

Ferrofluids have also been of interest to artists, perhaps for their weird, other-worldly appearance. This video is by Sachiko Kodamam, a Japanese artist known for her work with technology.

S.T.E.M. coverage is sponsored by Citizen Websites, the web development arm of CaryCitizen.