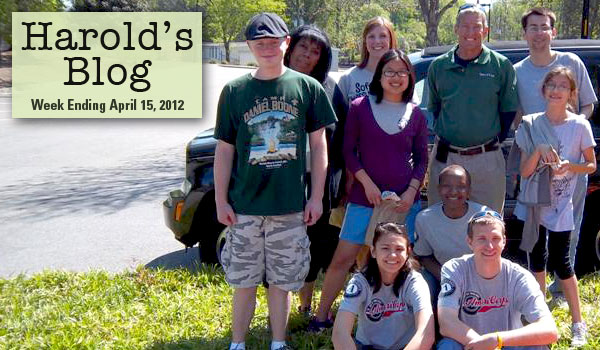 Cary, NC – This week was the opposite of last week (a vacation week) with lots of meetings with long days and nights.

Monday I had meeting with Mayor Pro-Tem Adcock to catch up on things. We talked about various issues and how to better communicate with each other. We plan to have these meetings on at least a bimonthly basis.

Tuesday midday I attended a meeting of the Triangle Chairs and Mayors. There were approximately a dozen officials in attendance to listen to economist Dr. Michael Walden of N.C. State talk about our economic outlook. Some of the takeaways include:

The recession was officially from December 2007 to June 2009. That means things stopped getting worse (overall) after June 2009.

After the presentation there were several questions from those in attendance. For example what gas price would it take to stall the recovery? The answer was $5 a gallon.

Tuesday afternoon I met with the town manager to catch up on things. We talked about upcoming agenda items on the Planning and Development Committee agenda and the Town Council Meeting including an economic development opportunity. Earlier in the meeting we were joined by the town clerk to go over the appointment process to replace council member Robison. Here is the timeline for that process:

I believe this is a very optimistic schedule but I believe it is something we can achieve as a council.

Tuesday night I, along with other council members, hosted state legislators that represent Cary. In attendance were Senator Richard Stevens, Representative Nelson Dollar, Representative Jennifer Weiss, and Representative Tom Murry. The Cary Council was represented by Council members Smith, Robison, Adcock, Bush, and me. After dinner I presented our legislative agenda. In my comments I made the following points:

After presenting our items I led a discussion on goals and expectations for this short legislative session. All of the legislators believed the short session would be very quick and pledged their support to Cary.

Wednesday morning I joined five other Wake County mayors in Morrisville in a meeting with school board members. This was the second time in history that the two boards had met. The first time was two years ago. Other mayors in attendance included Mayor McFarlane of Raleigh, Mayor Holcombe of Morrisville, Mayor Sears of Holly Springs, Mayor Matheny of Zebulon, and Mayor Hinnant of Wendell. School board members in attendance include Christine Kushner, Deborah Prickett, Kevin Hill, Susan Evans, Deborah Goldman, and Dr. Jim Martin. Comments received from School Board members regarding assistance from Mayors in meeting specific unmet goals:

Comments received from Mayors regarding requests for assistance from School Board members in addressing education-related issue in each municipality:

Additional comments included an agreement was reached that more and better communication between Mayors and School Board would benefit all, an an annual meeting of School Board and Mayors was recommended. The meeting lasted just over an hour.

Wednesday afternoon I led a meeting of the Cary Economic Development Committee. Some of the interesting points from that meeting include:

This was the first meeting with the new makeup of the committee that includes citizens from the community. After updates and information the new committee members added information about potential opportunities locally and internationally.

My only meeting Thursday was with a local pastor. He leads a young, growing congregation that has committed to helping our community. For example, they distributed backpacks full of school supplies to kids in a town trailer park. In our conversation the pastor expressed interest in expanding their service to others.

We are so fortunate to live in a community where citizens care about each other and are willing to help.

Friday I met with Mayor Pro-Tem Adcock and staff to go over trends and ideas for the upcoming budget. The council will begin budget work sessions in May.

Saturday morning, I joined a group of people at the Page Walker for the Spring Litter Sweep. In this area group were several AmeriCorps volunteers and US Veterans Corps. After a few opening comments and introductions we split up into small groups. My group, made up of a US Veteran Corp volunteer and a dad with three kids, focused on Wilkinson Avenue, Field Street, Bowden Street, and part of Sorrell Street. We picked up several bags mostly recyclables.

Unlike my previous litter sweeps on US1 where it appeared most of the litter was blown out of trucks, these were mostly beer and liquor bottles that had been tossed from cars; very sad and scary. 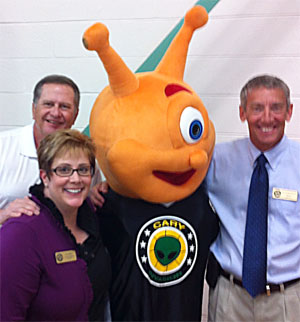 Later Saturday I co-hosted a volunteer dinner for the outgoing members of the Economic Development Commission, the Town Center Review Commission, and the Citizen Issue Review Committee at the Herb Young Center. Joining me from council was council members Smith and Bush.

After dinner we presented gifts to the outgoing board members. Then we headed downstairs to watch the Cary Invasion professional basketball team play Big Texas from Jacksonville, NC. It was my first game and the home town boys didn’t disappoint us and thoroughly thrashed the visitors in the first half. I, along with my council colleagues in attendance had our picture made with Cosmo the mascot. At halftime we did a short skit to honor our outgoing volunteers. Yes it was lame but we had a lot of fun anyway.

Sunday evening I had the privilege of giving closing remarks at the Nazim Hikmet poetry festival at the Page Walker. The event drew notable poets and musicians from around the country as well as poetry lovers from the area. The event was organized by the American Turkish Association of North Carolina.

After my remarks we sat down to a wonderful dinner of Turkish cuisine and were treated to Turkish music. It was a great evening.

In a news article the week the local paper once again portrayed the town as the bad guy in their story about the Joint Land Use Plan with Chatham County. It is too bad our local news doesn’t provide fair and balanced reporting on a consistent basis. Or better yet, report on things going on in town like the litter sweep, the Cary Invasion, volunteer groups, the poetry festival, etc.

I find that my best source of information comes from the CaryCitizen.

Next week will be another busy week for me with several work sessions, a council meeting, a CAMPO meeting, and dinner with long time French friends.

Well that is all for this week. My next post will be on Sunday, April 22nd. Please feel free to email me with a comment. Email all Town of Cary questions or comments to Harold.Weinbrecht@townofcary.org. Email personal comments to augustanat@mindspring.com.