Cary, NC – Last week, the Carolina RailHawks faced the Ft. Lauderdale Strikers at Wake Med Soccer Park. The CaryCitizen team was there, in the SkyBox, as guests of the RailHawks organization.

It was a great night – beautiful evening weather and an up-tempo, high-scoring game. I even got to sit next to the League Commissioner during the second half!

Taste of the Triangle

The evening kicked off with the RailHawks’ 4th Annual Taste of the Triangle. Restaurants and craft beer vendors from around the Triangle were on hand serving food and drinks and passing out samples of their wares. 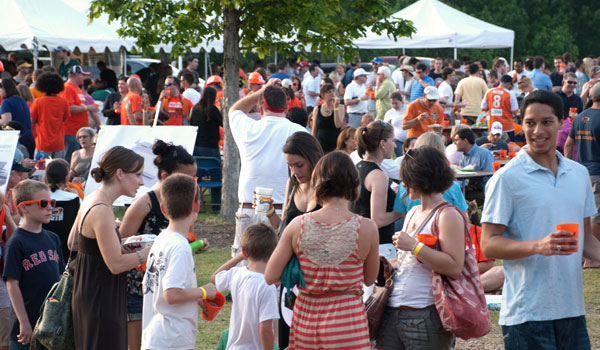 The RailHawks carried the play most of the game, but got a little leg weary as the game went on and the Strikers came back on the scoreboard.

Cary’s own Zack Schilawski got his first start with the RailHawks Wednesday night after spending two seasons in Major League Soccer with the New England Revolution.

The first half found the RailHawks getting the lead 1-0, with Forward Brian Shriver scoring for the Hawks after a great set up by Schilawski. Shriver leads the team in scoring. The RailHawks had 5 shots to the Strikers’ 4 in the first half. 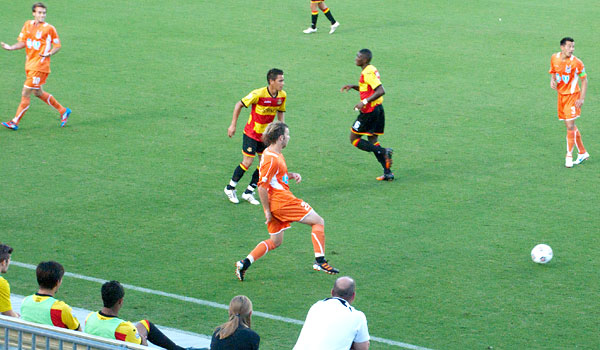 I sat next to NASL Commissioner David Downs in the second half. He was happy to share what he was Tweeting during the game. We also had a laugh at some of the more rabid soccer fans’ Tweets. Great stuff. The RailHawks really carried the play and Zimmerman scored early in the half with a Shriver assist.  Zimmerman ran to the corner and did a perfect salsa dance to his team mates’ – and the crowd’s – delight.

The Strikers scored in minute 61 on a free kick by Laing. Carolina’s Zimmerman countered with a goal in the 65th minute (another salsa dance).

With the score 3-1, Restrepo quickly scored for the Strikers. They then tied it with an unstoppable shot by Mark Anderson. 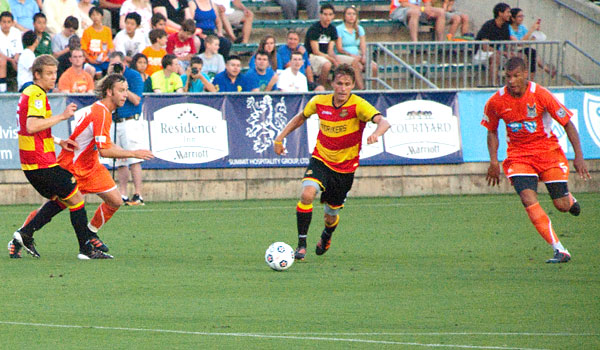 Incidentally, we brought a “non-soccer-fan” with us. He was hooked. RailHawks soccer is hard to beat as a family night out – lots of fun and at an affordable price.

The RailHawks headed north to face Edmonton on Sunday May 6 in an away match, falling by a score of 3-0.

They return to WakeMed Soccer Park on May 19 to face the Puerto Rico Islanders. Get tickets.

Election Day: Vote on Tuesday May 8