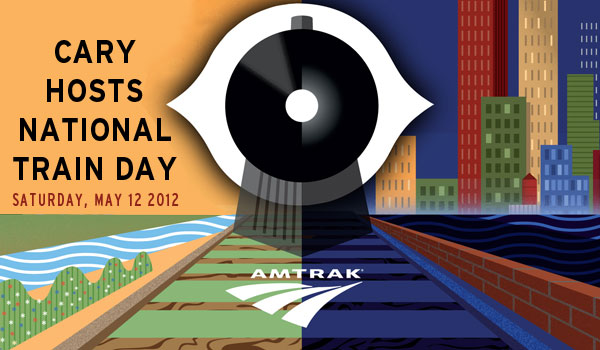 Cary, NC – On Saturday, May 12th, one lucky family-of-4 will be able to win a trip anywhere Amtrak travels on the East Coast. It’s all part of Downtown Cary’s first ever National Train Day celebration.

The Heart of Cary Association in partnership with Amtrak and the Town of Cary will host National Train Day at the Downtown Cary Railroad Station. This is the first time the event has ever been held in Cary, and Downtown advocates as well as Town of Cary officials are hoping it’s the start of something big.

Festivities begin a little before 10AM with the Cary Town Band playing selections from their Planes, Trains & Automobiles repertoire as the Amtrak Carolinian train #80 arrives just after 10.02 AM, bringing guests and visitors to Downtown. Then, following a brief ‘welcome’ by Council members and other dignitaries, the Amtrak station will come alive with displays, videos, food vendors and giveaways throughout the four hour event.

The North Carolina Railroad Company is bringing Train Whistles for the first 200-children who attend, while Amtrak will be handing out Conductor Hats to everyone.

Nearby at the Page-Walker Arts & History Center, free tours will be offered of the 1868 building, a former railroad hotel. Learn all about Cary’s railroad history from a guide dressed in 19th century period costumes.

Ashworth’s Drug Store will be giving away free popcorn. Food vendors including Chick-fil-A, Boogie Bean Coffee, Toreros Mexican and Dorry’s Downtown Deli will be available offering a selection of lunchtime fare. The ‘Chick-fil-A cow’ and Cary Invasion’s mascot ‘Cosmo’ will also be there to delight children and other guests.

There will be a children’s Face Painting Princess and ‘Balloon Pirate’, along with CaryCitizen photographer Brooke Meyer to take children’s and family photos for Moms and Dads. Amtrak will also have railroad coloring books and crayons for visitors as well as videos of their history, rolling stock and other day trip destinations up-and-down the line.

The Carolina Piedmont Division of the National Model Railroad Association (NMRA) will set-up a display inside the station and will be available to answer questions about railroading, while WildatArtKids will provide a ‘hands-on’ train play table. Children can also make their own train-related items courtesy of Cary Creative Center.

And finally, Amtrak is sponsoring a drawing for a free family-of-four train getaway to anywhere on the East Coast Amtrak travels. A trip to Maine, perhaps? Or maybe a vacation in Florida. One lucky family will win this fabulous prize. Check out Amtrak’s Interactive Route Atlas.

National Train Day is a holiday started by Amtrak in 2008 as a method to spread information to the general public about the advantages of rail travel and the history of trains in the United States. It is held each year on the Saturday closest to May 10th, the anniversary of the pounding of the Golden Spike in Promontory Summit, Utah (1869) which marked the completion of the first transcontinental railroad.

Events are held at Amtrak stations as well as railroad museums across the country and often have passenger cars and model railroad layouts on display. The largest events usually take place in Washington, D.C., Philadelphia, PA, Chicago, IL, and Los Angeles, CA.

Downtown Community coverage on CaryCitizen is sponsored in part by Studio 180 Salon in Chocolate Smiles Village on W. Chatham Street.

A Night at the RailHawks