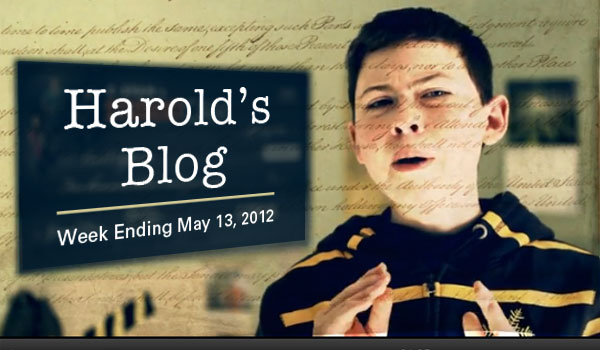 Cary, NC – It was a typical week for me this week with a council meeting, events, and meetings.

Monday night was personal as I attended my Confirmand’s Statement of Faith.

In my religion and denomination each youth (Confirmand) goes through a year of classes before asking the elders to become a member of the church. They are mentored by “role models” from the church throughout the year. I was fortunate enough to be selected for one of these youths. My Confirmand will go before the entire church at the end of May. 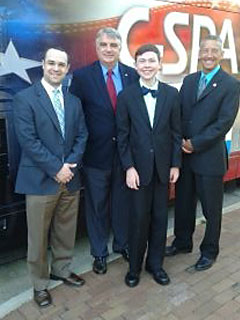 On Tuesday morning I participated in a ceremony to recognize Carl Colglazier, an ninth grade student, as the grand prize winner of C-SPAN’s National 2012 Student Cam video documentary competition.

Student Cam is an annual national video competition where middle and high school students produce a short video on a specific topic related to the competition theme about issues affecting our nation.

After the ceremony we all headed out to tour the C-SPAN bus.The Bus is equipped with computer kiosks that access C-SPAN’s many websites, including the Video Library, C-SPAN Classroom, Congressional Chronicle, and Book TV. Visitors can also test their knowledge of public affairs with quizzes, learn about Student Cam and follow the Road to the White House.

Tuesday was a busy day for me. I started by calling council members to see if they had questions or concerns on the agenda for the upcoming council meeting on Thursday. I was only able to get in touch with council member Frantz. However, council members Bush and Adcock had told me previously they had no questions. Later that afternoon I met with management, administration, directors, and other staff to go over the agenda. Based on our review the upcoming meeting seemed like it would be a quick one even with a closed session. My guess was that the meeting would last about an hour.

After the agenda meeting I met with the town manager briefly and discussed the future route of I-540. The next phase of I-540 is now being studied. A few months ago a route, called the red route, was removed by the Legislature at the request of Garner. Currently there are not enough route options to meet federal guidelines for a study. There is a chance that the federal government will remove funding for this project if the study does not continue.

My last meeting on Tuesday was with a delegation from China. One of the key members of this delegation owns over a hundred companies and is looking to invest in Cary. He said he has already made a decision to do so. He also stated that he is very interested in establishing a sister city relationship with Cary. I hope all of this comes to fruition.

Wednesday I met with two representatives from St. Paul’s Center for Hope and Healing. They are doing a great deal for our community especially in the area of mental health. One of their prime objectives is to meet the needs of those that don’t have insurance. They hold classes in Marriage and family issues, Grief, Mental health concerns, Life skills training, Support groups, and Wellness training. In my conversation with them I discussed other ways to get involved in the community and people to contact for grants and support. God bless them!

Wednesday evening I chaired a meeting of the Western Wake Partners Policy Advisory Committee which is made up of town managers and mayors from Cary, Apex, and Morrisville. I was the only mayor in attendance but we had enough managers for a quorum. We approved three contracts for construction of the Western Wake Wastewater facility and minutes from previous meetings. The meeting took less than half an hour.

The manager’s budget pointed out that Cary remains very lean with 8.2 staff members per 1000 residents. In addition, while Cary has added 10,000 residents over the last four years the staff level has remained about the same. The manager also pointed out that this fall’s bond referendum is critical. He said “The bond referendum that’s going before voters this fall for transportation, parks and fire projects will be a key factor in how our future capital plans evolve since without approval of the bonds and the associated tax increase, many projects will not be able to move ahead in the near term, in the next three to five years.”   The manager also recommended $48 million capital plan that includes $1 million for Downtown improvements, $2 million for street resurfacing, $1.1 million for the New Hope Church Trailhead Park, and $3.7 million for developing the Crabtree Creek Greenway. Of the 49 general capital projects totaling $21.8 million, 24 are repair, renovate or replacement-related; over half of them are funded fully or partially by Federal grants or State collected local revenues. The manager is recommending no new debt be incurred for general capital projects like parks and road. To read the entire manager’s budget message visit http://budget.townofcary.org/budget/fy2013/010-messageoperatingbudget.pdf.

The only decision point with discussion for council was the LDO amendment for telecommunication towers. A few months ago the council asked staff to craft an ordinance amendment that streamlined the process for stealth telecommunication towers as an incentive. In the streamlined process the council would not be part of the decision on the stealth towers resulting in a much shorter and cheaper process. It was the hope that this new incentive for telecommunication towers would encourage development with stealth rather than the ugly lattice and monopole towers. The discussion at the council meeting was whether or not to allow a balloon test and public input as part of the stealth process. The majority of the council felt that the cost of the balloon test for stealth towers would add an unnecessary additional cost and since the proposed stealth process was administratively approved a public input session might mislead residents to think that council was making a decision. It needs to be noted that residents will be informed and can always provide input even without a public input session.

Friday I did a short video for the Cary Chamber of Commerce’s fifty year celebration. To see what that is about you will have to attend on Tuesday night.

Saturday I was honored to attend the Eagle Scout ceremony for Jonny Harding. I congratulated him on his accomplishment and told him that I looked forward to his continued contribution to our community.

Saturday night I attended the Urban Ministries concert at Booth Amphitheater starring the B52s. It was a full house and the B52s did not disappoint the crowd playing all their hits.

In news this week, a burglary hit my neighborhood. Apparently someone went to bed with their garage door unlocked and their house unlocked. Items were taken from the house, garage, and car. Please help keep Cary the safest municipality in the southeast by not creating opportunities for thieves. Always, lock doors, keep garage doors closed, and never keep valuables in plain sight. If you don’t have a neighborhood watch program then start one. The GeoPolicing captain for your district will help you.

Get the Real Facts

In other news, the local paper did another story on the Bowden House this week. While it was an improvement over the past stories it still lacked in completeness. In this story they left out two key points. The buyer of the house found out that the gutters were clogged and that the sump pump was not working. The local paper just said “he solved drainage issues Bowden blamed on the town”. To read the local newspaper story go to http://www.carynews.com/2012/05/08/56926/cary-house-is-screwed-no-more.html. To read a version of the story that included these two important facts visit Cary Citizen and read https://carycitizenarchive.com/2012/05/01/house-of-the-week-david-bowdens/. In my opinion these facts support what the town has been saying all along. That is, the drainage problems were pre-existing and not a result of the construction. One has to wonder why these facts were left out of the local newspaper story.

This week staff sent out the latest list of plans under review as of the end of April. They can be reviewed at http://www.townofcary.org/Assets/Planning+Department/Planning+Department+PDFs/planreview/Active+Projects+in+the+Review+Process+(sorted+by+date).pdf. Items on the list include a 222,000 square foot office building at SAS, a gym at St. Michaels, the downtown theater, a preschool, and dependent care units.

Staff also released information that the replacement of the bridge over Green Level Church Road Bridge at White Oak Creek has been contracted out by the Department of Transportation. The bridge, which is 60 years old, is considered structurally deficient and functionally obsolete. It is still safe, but has been requiring maintenance and repair and needed to be replaced. It was also built to lane and shoulder width standards that don’t meet current standards. The new bridge will be able to better accommodate the increased traffic brought on by growth in the area. The project means drivers who have been using the current bridge use will have to use a detour of just over four miles. Detour signs will direct them onto Green Level West, Wimberly and Jenks roads to get around the construction zone. Work on the project can start between August 1st and March 1st, 2013, with the new bridge in place within 240 days of the start date.

Well that is all for this week. My next post will be on Sunday, May 20th. Please feel free to email me with a comment. Email all Town of Cary questions or comments to Harold.Weinbrecht@townofcary.org. Email personal comments to augustanat@mindspring.com.