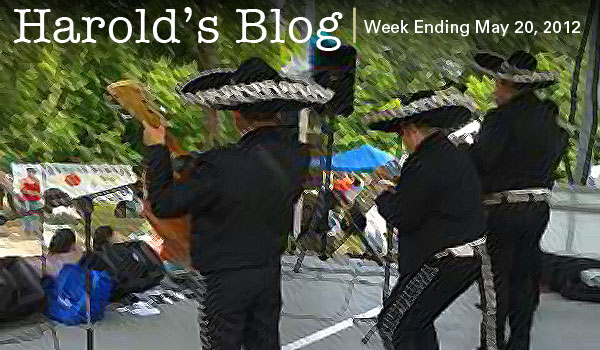 Cary, NC – It was another busy week in the office of the Mayor.

Monday started with several inquiries from the media about Cary’s red light camera system. Cary’s system is under review by staff since 31 errors were discovered because of incorrect citations on flashing yellow left turns. The following is the information to date on the system:

I prefer to make my decisions and give my opinions once all information has been provided. However, it will be a challenge to keep running the red light program the way it is currently running.

Later Monday, I attended the Cary Chamber’s Honor a Teacher Program that recognizes teachers that go above and beyond the call of duty. There were over 130 teachers nominated for 27 awards. Council member Smith and I presented two awards.

Tuesday was a long day for me. Our first work session on the 2013 fiscal year budget started in the afternoon and went well into the night. The proposed budget has no tax increase and no new debt. Council will hold another work session on the budget after public hearings on May 24th and June 14th. Highlights I noted from the budget included:

The council also discussed several issues including grant matching for Black Creek Greenway, a study for a safety town in downtown, and whether or not to keep $25,000 in the budget for community gardens. It was decided that these issues will be addressed after public hearings. After the public hearings we will have all requests for modifications to the budget and will make a decision then. The council did make some key decisions at the work session that included:

After going over the budget the council went into closed session to discuss the performance of our direct reports: the town manager, town attorney, and town clerk. We reviewed and summarized their performance and made decisions on merit pay. This will be part of the budget and will be made public then. The council also makes decisions on its own pay. We will not have a pay increase or an expense increase.

On Wednesday I attended a meeting of the Capital Metropolitan Planning Organization Transportation Advisory Committee which is referred to as CAMPO. Actions taken that are of the most interest to Cary include:

In the NCDOT report it was stated that there is no intent for the state to pass roads on to the county as part of legislation. That is good news!

A poll was done by Fallon Research about the half cent transit referendum. Here are some of the results:

Due to a cancellation, I only had one meeting on Thursday. I met with the President of Career Champions to talk about their services which include career transition, professional development, and employee engagement. We met for about an hour and had a great conversation.

Saturday started by attending the 30th Celebration of the White Plains Children Center. This is a non-profit development day, childcare, and preschool. The school serves children with and without disabilities, and is the only school of inclusion in western Wake County.

Cary is fortunate to have had this invaluable resource for so many years. Parents of children with disabilities come from all over Wake County. I had the honor of giving greetings from the town. The ceremony lasted for about two hours and included several tearful testimonials.

God Bless the White Plains Children Center and the work they do.

Next I headed over to the Cary Swim Club for their 50th Anniversary celebration. This club is not only the first swimming pool in Cary but the first competitive swim team in Cary. It was actually the first swimming pool I ever swam in. In the early years people of Cary gathered at the club for July 4th celebrations with fireworks after watching little league baseball games and participating in other games like the “greased pole” challenge.

It was a fun event and the ceremony lasted a little over an hour.

In my comments to the crowd I mentioned, as I have before, that it is through events like this that we get to know the values, experiences, and talents that each of us have to offer. And it is only through understanding and mutual respect that we can reach the full potential of our community.

This event went on for several hours but I was only able to stay about an hour.

Sunday I gave welcoming comments to the NCAA Division III National Tennis Championship participants. There will be a team competition Monday through Wednesday and then individual competition the rest of the week. It is important to understand that Division III athletes are not scholarship players.

In my remarks I talked about our excellent facilities and staff and being one of the NCAA Championship cities.

In news this week, the joint subcommittee made up of members of the Cary Town Council and the Chatham County Commissioners met this week. Some of the highlights from that meeting include:

In other news there will be a Citizens Informational Workshop for the Proposed Improvements to Morrisville Carpenter Road from West of Davis Drive to East of Old Savannah Drive in Morrisville held on Monday, May 21st from 4:00 to 7:00 PM at Morrisville Town Hall.

The Triangle area Hindu temples and Triangle Area Indian Physicians are conducting their annual Health fair at Hindu Society of North Carolina Temple at 309 Aviation Parkway Morrisville, on June 23rd. This health fair is free and open to the public. This is a great service provided to citizens in the area.

Well that is all for this week. My next post will be on Sunday, May 27th. Please feel free to email me with a comment. Email all Town of Cary questions or comments to Harold.Weinbrecht@townofcary.org. Email personal comments to augustanat@mindspring.com.