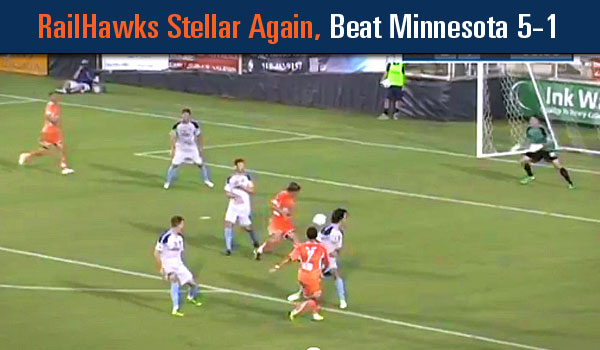 Story by Matt Young. Images and video courtesy of the Carolina RailHawks.

It was a bounce-back game in a big way after losing narrowly to MLS Chivas USA in the 4th round of the U.S. Open Cup . It was the RailHawks fourth win in the last five games.

The Stars hail from Blaine, Minnesota (in the Minneapolis-Saint Paul  area) and were the 2011 NASL Champions.

Coach Manny Lagos of Minnesota was not present because he was red-carded for “dissent” last week against the San Antonio Scorpions.

Defender Austin King scored his first goal of the year in the 24th minute on a header assisted by an Austin Da Luz. In the 41st, Nick Zimmerman scored on a shot from 20 yards out.

Minnesota’s Simone Bracalello scored late in the half.

The second half began with Brian Shriver picking up a rebound off of a Zack Schilawski post-hitting shot in the 53rd minute.

In the 62nd Schilawski got the ball inside the posts this time to make the score 4-1 after a perfect pass from Breiner Ortiz.

Jason Gary sealed the deal with a header that went in from a Ty Shipalane free kick.

Game recap video courtesy of the RailHawks. You can also see it on YouTube.

The RailHawks will be in Atlanta against the Atlanta Silverbacks on June 16th. Games are broadcast live at www.CarolinaRailHawks.com/live.

The RailHawks will be back at Cary’s WakeMed Soccer Park on June 23rd versus FC Edmonton.

Tickets are available online at www.CarolinaRailHawks.com or call the box office at 919-459-8144.