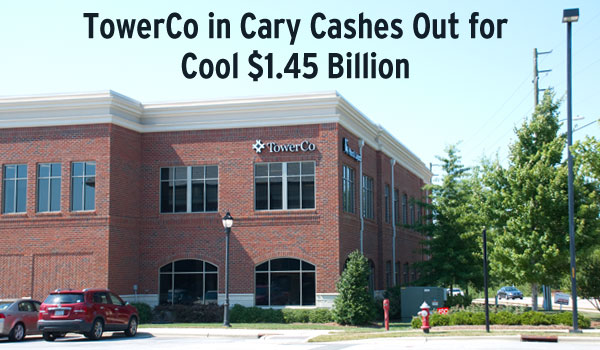 Cary, NC – Break out the champagne for Cary-based TowerCo. They are selling their assets to SBA Communications for $1.45 billion dollars according to The Deal Pipeline.

Started in 2004, TowerCo became a player in the consolidation of wireless assets. In 2008, TowerCo sold it’s entire inventory of more than 400 towers to SBA for $194 million.

Soon after, it used the cash to start buying again. Industry analysts have speculated that TowerCo may play that same strategy again, using the money from the current sale to start acquiring new assets.

Cashing Out or Doubling Down?

Time will tell if TowerCo is cashing out or doubling down. The company has expressed an interest in T-Mobile USA’s wireless assets, but that is sure to be a hotly contested sale.

Nonetheless, wireless usage continues to grow in the U.S. and around the world.

What’s undeniable is that TowerCo is another homegrown Cary business success story. Whatever the next chapter, wine stores may see a run on the bubbly.