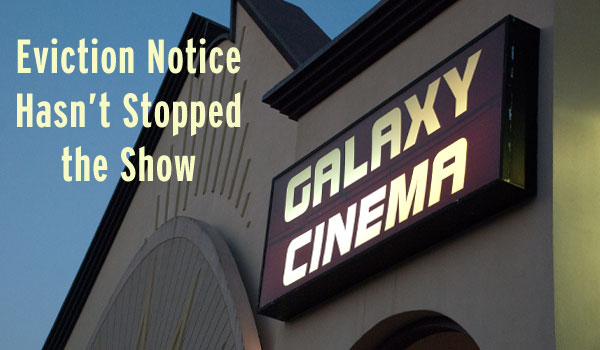 Cary, NC – Rumors have been swirling about an eviction notice and possible demolition of the Galaxy Cinema in Cary. Those plans are far from certain, but in the meantime, you can show your support by seeing a movie at the Galaxy this weekend.

What’s Happening to the Galaxy Cinema

As reported on Harold’s Blog this week, a site plan was submitted to Town of Cary for the demolition of the Galaxy and its replacement with a Harris Teeter supermarket.

York Properties, which owns the land, has issued an eviction notice to the cinema. York says Galaxy owes 21 months back rent and failed to show up at a hearing earlier this year.

In the meantime, a Facebook group called Save Galaxy Cinema has sprung up. At this reporting, it had 790 fans.

A town official told CaryCitizen that redevelopment of the site might require a substantial retaining wall to compensate for a steep drop in the street adjacent to the property. A request for waiver of this requirement might prove difficult to obtain, delaying the redevelopment or raising the price tag significantly.

You may have heard reports that the owners of the land that Galaxy Cinema sits on have submitted plans to demolish Galaxy Cinema and move forward with other development for a corner property that has become pretty valuable as Cary has grown over the years.

Please know that although the landowners are speculating about this possibility, at this phase it is only one possibility for the site and not a concrete plan for the future of our little arthouse home.

In any event, Galaxy is still open. You can escape the heat this weekend in Cary and show your support by going to see a movie.

The Best Exotic Marigold Hotel – PG 13. A group of British retirees decide to “outsource” their retirement to less expensive and seemingly exotic India. Enticed by advertisements for the newly restored Marigold Hotel and bolstered with visions of a life of leisure, they arrive to find the palace a shell of its former self.

Bernie – PG 13. In small-town Texas, the local mortician strikes up a friendship with a wealthy widow, though when he kills her, he goes to great lengths to create the illusion that she’s alive. Starring Jack Black and Shirley MacLaine.

Lola Venus – Rated R. Dumped by her boyfriend just three weeks before their wedding, Lola enlists her close friends for a series of adventures she hopes will help her come to terms with approaching 30 as a single woman.

The Island President – Rated PG, Documentary. After bringing democracy to his country, President Mohamed Nasheed of the Maldives, the lowest-lying country in the world, takes up the fight to keep his homeland from disappearing under the sea.

Monsieur Lazhar – PG 13. At a Montréal public grade school, an Algerian immigrant is hired to replace a popular teacher who committed suicide in her classroom. While helping his students deal with their grief, his own recent loss is revealed.

TowerCo in Cary Cashes Out for Cool $1.45 Billion

Music: A Fifth of Blues at Iron Horse on Friday
Scroll to top
%d bloggers like this: