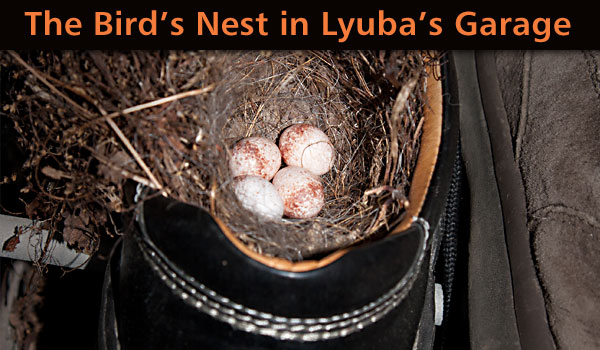 Cary, NC – Lyuba Boulkina and Simon Tsynkov went back to their homeland a couple weeks ago for an extended visit. But when they returned to Cary, they found some squatters living in the garage.

My new neighbors across the street are from Russia.

They’ve brought me great happiness teaching me the joys of  “freezer vodka” and that it is cool to roast lamb in your backyard. And that going to a party where you are the only guests who speak exclusively English is OK – “Russian hospitality” they call it.

Lyuba and Simon got home from Russia and went to the garage to get into a new pair of shoes, and were surprised to find a nest with eggs in one of the pairs of shoes (a house wren Lyuba tells me). They were afraid that the mother would abandon the nest because it was so close to their stairs and there was so much traffic passing by it every day.

In the beginning, the mother bird would fly around the garage when people were near, but eventually she would ignore people while incubating her eggs. There was a gap in the garage door weather stripping that the mom would use to fly in and out, bringing food to her chicks. 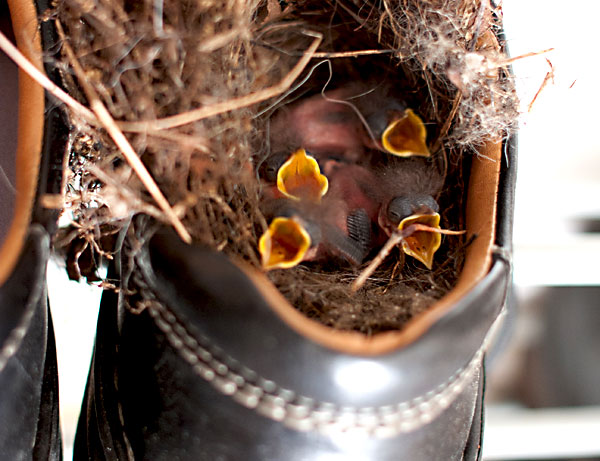 Then the chicks were born. Initially, they were making noise and would open their mouths each time Lyuba, Simon or their two boys would pass. Eventually, the babies learned that the things without feathers were useless and they played dead when the family passed through.

The mom wren was constantly bringing the chicks tasty insects. One presumes they were tasty.  The human family kept water in the garage so the mother could get it easily. They left the garage door open all the time so the birds would get at least some air movement.

One day there were only two of them in the nest and other two were on the floor.

We sat there and watched them jumping and trying to fly. Both bird parents continue to feed all of them – 2 on the floor, 2 in the nest. The very next day the other two left the nest. Soon after they all left the garage. Mom stopped by one day after they had left. I think to say goodbye and thank you. – Lyuba Boulkina

“Shoes are for the birds!” Eudora Welty, The Shoe Bird 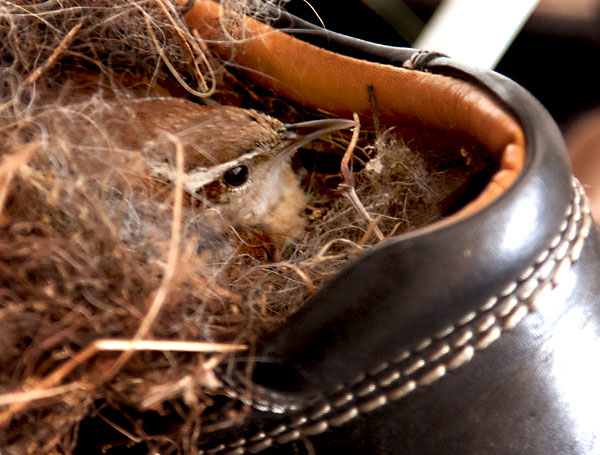 Planning the Future with the Cary Chamber