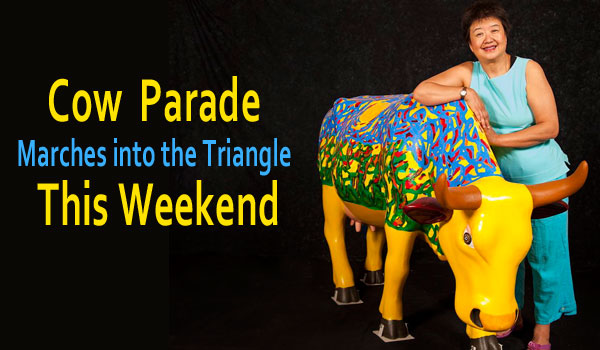 Cary, NC- This weekend 150 cows will appear all over the Triangle, as part of CowParade North Carolina, raising money for NC Children’s Hospital.  Several have been painted by local Cary Artists. 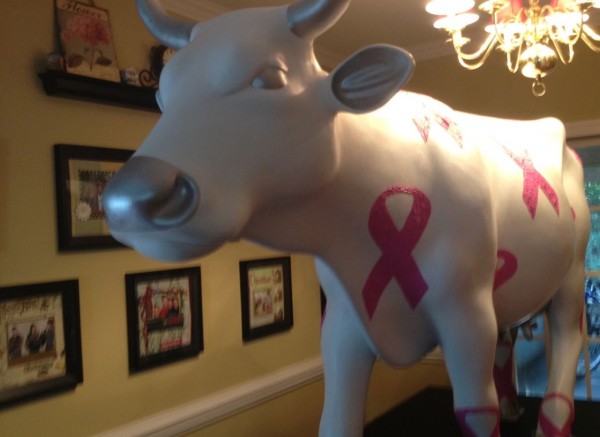 The cow named “Hope” was painted by another Cary-ite, Teresa Howard, with the familiar pink ribbons and then signed by breast cancer survivors or in memory by their friends and family.   Sponsored by Rex Healthcare, it will eventually reside at one of their area locations.

More than 150 painted and costumed cows will be placed in Triangle locations for 3 months (Sept-Nov), and then auctioned in January 2013 charity to benefit the NC Children’s Hospital.
The official “Round-Up” or kick off of CowParade North Carolina 2012 will be held Saturday August 18 at Golden Belt in Durham.  It is the only time and place where  all of the event’s cows will be in the same location at the same time.

The original “blank canvas” fiberglass cows each weighing approximately 125 pounds and sized 8′ long by 5′ high, were selected from conceptual sketches before the artists but brush to cow so to speak.

Cows On Parade, 13 Years and Counting

The original concept for Cows on Parade was started in 1998 in Zurich, Switzerland. In 1998,  Chicago shoe magnate Peter Hanig saw the original Cow exhibition in Zurich, and with Cultural Affairs Commisar(ess) Lois Weisberg, they hatched the concept to take this idea much bigger and 1999 Cows on Parade was created. The show, curated by Nathan Mason, had no fewer than 306 88-pound hollow bovines which were transformed by artists.

In 2001-2201 Raleigh held the Red Wolf Ramble project in which 100 red wolves were placed in public areas and later auctioned. In Eugene, OR, painted Ducks (in honor of the home team the U. of O Ducks) are scattered around town offering a humorous diversion after their own similar project launched .

The beneficiary of this event, NC Children’s Hostpital is right here in the Triangle. Located at UNC, The faculty of the UNC School of Medicine’s Department of Pediatrics offers complete inpatient and outpatient care at N.C. Children’s Hospital’s state-of-the-art facility at UNC Hospitals in Chapel Hill and at more than 25 satellite outpatient subspecialty clinics throughout North Carolina.

As a major referral center for children with complex medical conditions, N.C. Children’s Hospital has more than 100 pediatric subspecialists who, working hand-in-hand with community hospitals and pediatricians all across the state, provide specialty care to more than 70,000 children from all 100 counties throughout North Carolina each year.

In the coming months- try to spot as many of these bovine’s doing good for the community as you can. Take photos- and post them to our Facebook page. We’d love to see them!