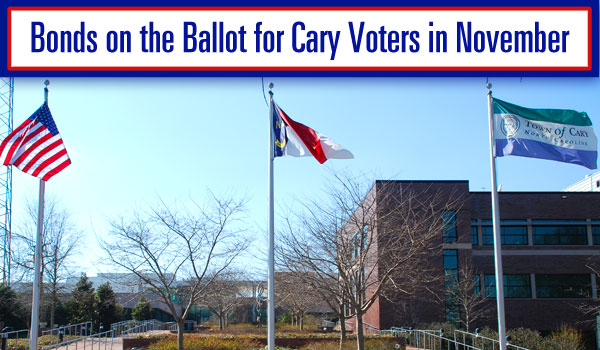 Cary, NC – Have you been watching the political conventions these last couple of weeks? I have. Closer to home, we’ll have a bond issue on the ballot in Cary this November, but you’ll have to exert yourself to cast your vote.

Cary will have three separate bond issues on the ballot, collectively called the Community Investment Bonds.

According to CaryBonds.org, one bond initiative goes to a new fire station. Another funds development and upgrades to seven Cary parks. The third bond issue covers roads, traffic lights, sidewalks and more in nine separate projects grouped under the heading of transportation.

Find It on the Ballot

Candidates and issues vary from precinct to precinct in Cary and across NC 55 in that part of town that’s in Chatham County.

In short, it’s hard to predict where the Cary Bond issue will appear on your ballot. So you are going to have to look for it.

I looked for a sample ballot on NC Board of Elections website. Good luck! Even the old ballots seemed to be on dead links. I think the NC-BOE needs a Technology Task Force like we have in Cary.

My guess is that the bond initiative will be on the back of the ballot. If so, that means you must turn over your ballot to vote on the bond issues.

If you vote straight ticket, or just for the Presidential candidates, your voice will not be heard on the bond issue. Arguably, the local bond referendum has more impact in Cary than almost anything that goes on in Washington.

As always, we won’t tell you how to vote. Just that you should vote.

Do your research and be prepared to cast your vote for or against Cary’s bond issue on election day. Your voice counts!

Register to Vote by October 12

The deadline for new voter registration in Wake County is Friday, October 12. Register to vote now.