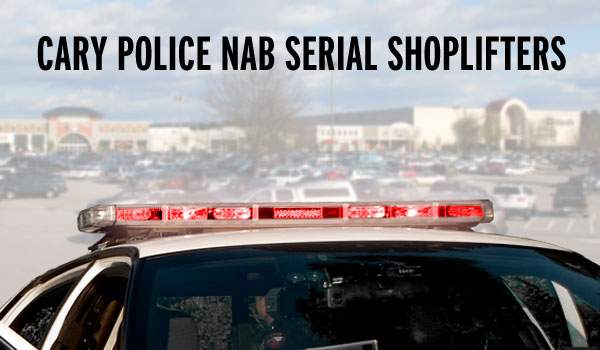 Town of Cary police have recovered several thousands of dollars in stolen merchandise thanks to a tip from local loss-prevention workers.

Danielle Bowen, 50, of 1800 Walnut Street, Cary, has been charged with Shoplifting by Concealing Merchandise Using a Lead or Aluminum Lined Bag, Larceny from Merchant by Removing Anti-Theft Devices, Conspiracy to Commit a Felony, and Felony Possession of Stolen Property. With these charges, she is subject to up to seven years in prison if convicted.

Her accomplice and ex-husband, Glen Bowen, 49, also of 1800 Walnut Street, Cary, has been charged with Conspiracy to Commit a Felony and Felony Possession of Stolen Property, charges that carry up to four years in prison if convicted. Both are currently being held at the Wake County Public Safety Center in Raleigh.

On the afternoon of September 4, loss prevention staff at Cary Towne Center’s Hudson Belk contacted the Town of Cary Police Department to report a shoplifting in progress.

Multiple items were found in Danielle Bowen’s possession, and a further search of her vehicle and residence resulted in the arrest of Glen Bowen and the recovery of several thousands of dollars worth of stolen merchandise.

Selling It on the Internet

“Since the arrest, the duo has admitted to selling stolen items on the internet over the last nine months,” said Criminal Investigations Captain Don Hamilton. “There are reasons why online deals sometimes seem too good to be true, so use caution when considering a purchase from a third-party seller.”