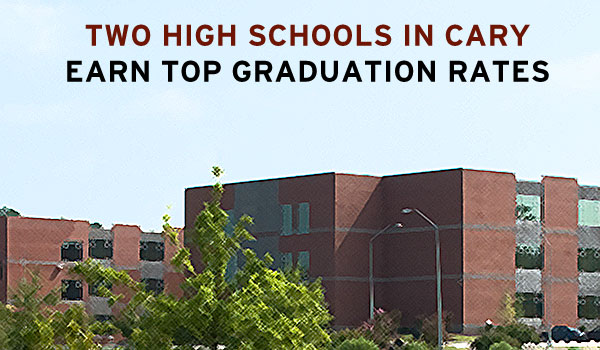 Green Hope High School, with between 400-499 senior students, and Panther Creek High averaging over 500, each earned top honors for graduation rates of 94.7% for the 2011-2012 academic year. These rates are taken in four year intervals following incoming freshman numbers through their senior year.

This is not the first time these schools have been singled out for their academic excellence.

Green Hope, founded in 1999, serves over 2000 students and has been named a School of Excellence for each of the last four academic school years with between 94% and 97% of students achieving at or above grade level performance.

Panther Creek, with current enrollment hovering around 2200 students was established in 2006.  Past awards for Panther Creek include the Governor’s 2008 Real D.E.A.L. School Award. The award was based on student achievement data from 2006-07 and 2007-08, results from the 2008 North Carolina Teacher Working Conditions Survey, and a school site visit from the Governor’s Office. Panther Creek is only the second North Carolina comprehensive high school ever to receive this honor and is the first Wake County high school to achieve this special recognition.

The two schools’ principals received awards for their high graduation rates at a luncheon this past week in Durham.