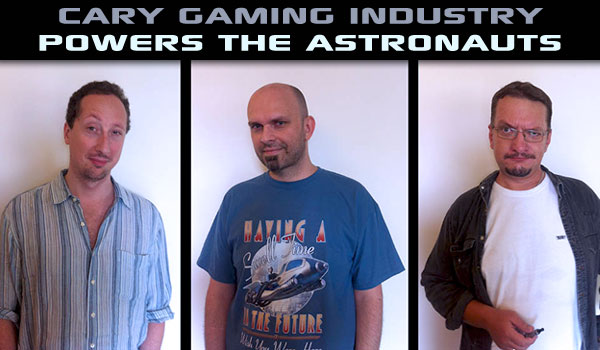 Story by Hal Goodtree. Photo by The Astronauts.

Cary, NC – Joystiq reports that Cary-based Epic Games has made a development arrangement with The Astronauts, based in Warsaw, Poland. Here’s the twist: the guys behind The Astronauts are former Epic employees.

Epic Games, founded in 1991, has truly become a colossus around the world and an industry here in the Triangle. But you know you’re really big when former employees and collaborators are spinning off to start their own shops.

Case in point is The Astronauts. Founders Adrian Chmielarz, Andrzej Poznanski and Michal Kosieradzki all worked at Epic’s subsidiary in Poland, People Can Fly. The trio led development on Gears of War and other titles including Painkiller and Bulletstorm.

Developers don’t usually build games from scratch. They start with a platform, or gaming engine.

“We thought about making our own engine for our projects. That lasted about ten seconds, nine of which were filled with laughter.” – The Astronauts

The agreement is for the use of Epic’s Unreal Engine 3 (UE3) as a development platform. The Astronauts are creating their first title, yet to be announced, for release in 2013 using UE3. The engine works on iPhone, Android, Mac iOS, Windows, Nintendo Wii, Flash, Xbox 3D, Sony PS3 and Sony PSVita, making development a whole lot easier for studios.

“We’ve worked with UE3 for the last six years, and we know its power,” said Adrian Chmielarz. “Choosing Unreal Engine technology for our future was the textbook definition of a no-brainer. We are on a quest to map uncharted waters, and Epic’s tech provides the stability required for success.”

“We’re truly impressed with what high-quality games small, independent teams are creating using the Unreal Engine,” said Mike Gamble of Epic. “There’s a good chance that The Astronauts will be one of those teams that makes us say ‘Wow.’”

Take note, citizens. When people in Warsaw (and many other places around the world) think of Cary, NC, one word comes to mind: Gaming.

Gaming is big business in Cary with economic development on a global scale.

Time to dust off that joystick.

Cary Real Estate: The View From the Curb