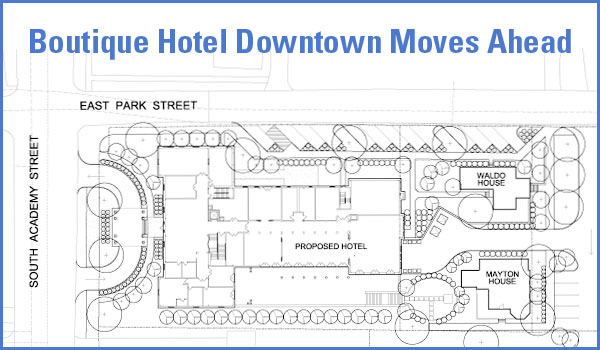 Cary, NC – The talk about a luxury hotel in Downtown Cary took on a more definitive tone with the announcement last week hearlding The Mayton Inn, a planned 45 room property on one acre of land at the corner of Academy and Park.

Here’s the text of the press release announcing the Mayton Inn:

Colin and Deanna Crossman, owners of the King’s Daughters Inn in Durham, NC, will be expanding their hotel business to include a new 45 room boutique inn in downtown Cary, North Carolina.

The Town has been collaborating with the Crossmans to develop a project that will blend with the historic character of the area while also increasing downtown density.

2 Historic Homes Part of the Parcel

The site is a 1-acre parcel on the corner of S. Academy St. and Park St. and will include the new construction hotel, as well as 2 historic homes that will be moved to the site – the Waldo Rood House and the Mayton House.

Construction plans schedule the ground breaking for April 2013 and date of completion is projected for April 2014.

While the upper two floors will consist of 33 spacious rooms and 11 deluxe suites, the first floor will boast over 13,00 sq. ft. with a library, full bar & restaurant as well as event spaces including meeting rooms and an outdoor terrace that will be open to the public. A high tech gym facility and spa rooms will be on the ground floor and available for guest use.

To create the luxury atmosphere, the Crossmans will work with Center Studio Architecture to develop the Georgian-style inn and will implement green technologies in all aspects of the building.

To create the Art Deco style of the Mayton Inn, the Crossmans will work with Megliola Beal Interior Design for interior design and aesthetics.

The Inn will offer High Tea, as well as turndown service with port and chocolates. A gourmet hot breakfast will be served every morning in the full service restaurant. In addition, the Inn will offer complimentary wireless Internet, in-­room iPads, and 42” HDTVs . 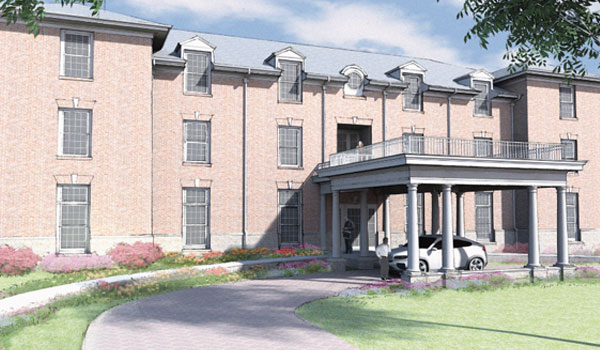