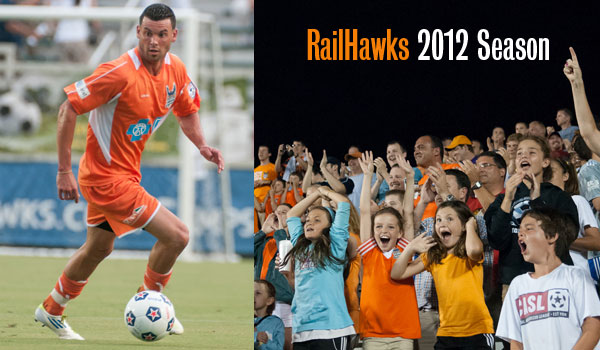 Story by Hal Goodtree, photo by Tom Mousseau. Above, Nick Zimmerman (left) and fans at the LA Galaxy game.

Cary, NC – The Carolina RailHawks were knocked-out of the NASL Championship Semifinals with a 3-3 draw on Saturday night in Tampa Bay. But the 2012 season had a lot to recommend it.

The NASL Playoffs feature two games per round. The team with the most points at the end of two games moves on. The ‘Hawks had lost to Tampa Bay 2-1 in Cary on October 6. So a 3-3 tie in Florida allowed the Rowdies to move on.

The RailHawks started off slowly in 2012, with six ties and four losses in the first ten games.

But the season turned around sharply on Tuesday, May 29 when the ‘Hawks beat the visiting Los Angeles Galaxy in non-league play. Just a week later, the RailHawks lost a close one 2-1 to Chivas USA, another MLS club.

After that, the ‘Hawks reeled off 5 wins and a tie in the next six before dropping a laugher to the league-leading San Antonio Scorpions 8-0.

The RailHawks finished in 4th place, earning a spot in the playoffs with a record of 10 Wins, 10 Ties and 8 Losses.

RailHawks midfielder Nick Zimmerman was chosen as a unanimous selection to the NASL XI, the league’s equivalent of first-team All-Star.

RailHawks President Curt Johnson was selected to the North Carolina Soccer Hall of Fame. He wil be inducted at a dinner in Greensboro on January 26, 2013.

Johnson was an All-State mid-fielder in high school at Ravenscroft. In college, he started 72 games for the Wolfpack, leading the team to an ACC Championship and NCAA semifinal as a senior and team captain.

The soccer season is long, and the off-season is short. The team will be back on the pitch in February, getting ready for the pre-season.

Between now and March, the front office will be trading, negotiating, evaluating.

And, by the spring, the new stadium redevelopment will be completed, adding an upper deck and many new amenities.

You can get a discount now on 2013 Season tickets, including the new Suite, Terrace, VIP and Club seats. Visit RailHawks 2013 Tickets.