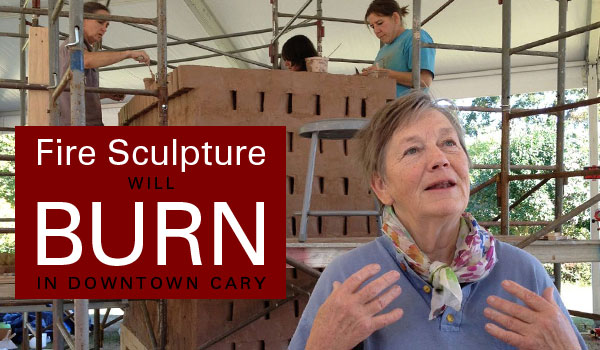 Story and photos by Lindsey Chester. Above, The artist, Nina Hole, with the fire sculpture being built behind her.

Cary, NC- Something is building at the corner of South Academy and Dry Avenue in Downtown Cary and all will be revealed, quite literally on November 2.

The Art That Burned for Two Days

Danish artist Nina Hole and her team of 3 assistants along with countless area volunteers are building a clay sculpture of monumental proportions. Reaching nearly 12 feet in the air and requiring over 7000 pounds of North Carolina clay, this piece of permanent art is one part performance piece, one part art happening and one part public works. It will burn for two days before being finished and the public is invited to watch.

Two years ago Andi Dees, head of the Ceramics Department at the Cary Arts Center took her daughter on a college tour of Appalachian State in Boone. While there she spotted a monumental sculpture on campus that intrigued her- and when she returned home, she researched the artist and all she could find out about its origins.

Then she decided to campaign to have one built here in Cary. She contacted Denise Dickens, Public Art Coordinator for the Town, and together they began a campaign to bring Nina here to build a permanent piece and to find the funds to accomplish that.

Nina has traveled the globe for over 20 years building about 1-2 of these large scale one of a kind sculpture installations per year. Her work can be found as far away as Korea, Canada, Mexico, Sweden, and Portugal. Nina arrived in Cary Oct 15 and she and her team will work everyday until Oct 30 to build the sculpture that will be fired and then revealed, and finally become a permanent fixture in downtown Cary on our Performance Green. 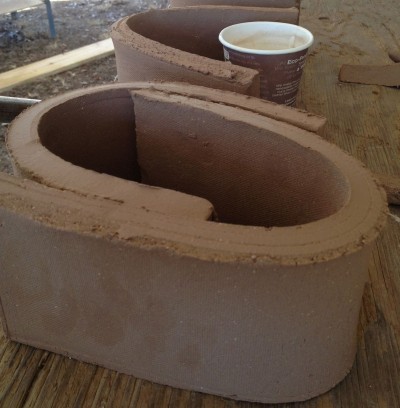 clay rolled out and shaped, ready to be added to the sculpture

How the Sculpture is Built

First a brick foundation is laid in a large square . Then the artists begin rolling out slabs of clay that are then cut into rectangles which are set in a curved shape. These are attached on one side in a “C” shape and connected together  to create the walls of the tower and stacked in rows. The artists then work to smooth the sides and build strong connections. Over the days of building, the clay is drying, The open brick-like formations also aid in the drying which needs to be gradual to keep the structure strong. The curves in the “bricks” allow for openings in the sides, which will also keep the structure ventilated as it fires and cools.

Inside the sculpture there is double wall system set up that allows the building to be done fast and straight. The structure also includes a 4 part chamber inside that also helps the air circulate during the drying and the firing. If the ventilation is not right, at these high temps the sculpture could actually explode.

Nina has been building these large scale installations since about 1994, and has worked with Ann-Chalotte Ohlsen throughout the process. Her other two assistants, Renata and Beth have come here to Cary to help as well. Meredith College created a class which has helped fuel the volunteer pool with art students.

The clay air dries as the artists work, and when it is completely dry, a fine slip (called terrasigilatta) will be sprayed on it to give the tower a yellow color after its fired. Unlike most pottery, which is fired twice- once to cook the clay, and a second time to cook the glaze or coloring- this piece will only go through one firing.

The structure will be wrapped in a  huge fire retardant blanket that will also insulate the piece as it fires. The fire will be built on November 1,  and the sculpture “Reveal” is slated for the evening of November 2. Citizens are invited to experience the final stages of the firing and the ultimate reveal; light refreshments, including s’mores and cider will be available starting at 8:30 p.m.

“Outdoor firing is a once-in-a-lifetime experience,” said Denise Dickens, Public Art Coordinator. “The sculpture is created in such a way that it becomes its own kiln, and upon reveal, citizens can watch the orange glow transform days and weeks of work into a permanent fixture that reflects the spirit of the Town’s architecture.” Dickens added that Cary’s fire sculpture will be the only one of its kind in the Triangle and the second in the state.

Safety officials will provide support during the two-week construction and will remain onsite continually during the 24-36 hour firing period.

This $40,000 project has been funded as part of the $1.3 budget for 2013’s Downtown Development. This past year downtown development money also funded concerts on the green and land purchases such as the Cary Theater project. This piece will be the 32rd piece of permanent art that the town has purchased to date. 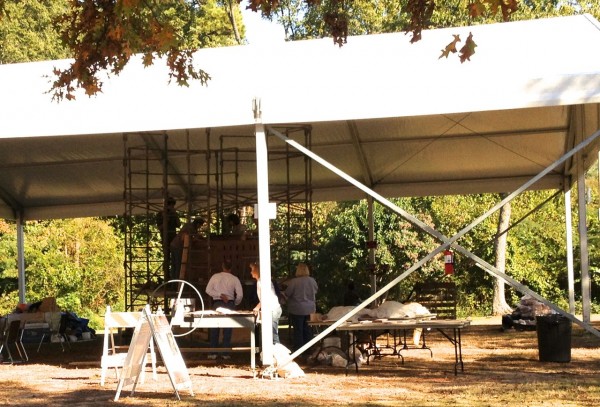 tent at corner of Dry and S. Academy Street where sculpture is being built

When the firing is done, the protective blanket will be pulled away. Then a red hot tower glowing red and yellow will be revealed which will slowly cool down over the next day or two from 2000+  degrees to the temperature of the surrounding air.

As part of the reveal, the Town of Cary will close S. Academy Street from Charlie Gaddy Lane to Dry Avenue from 8:00pm p.m. to midnight on the Reveal day. Citizens are encouraged to park at the Cary Arts Center and the Downtown Library after 6 p.m. For everyone’s safety, pets are not permitted.

Nina’s art will have an impact on Cary. The piece will be at a highly visible corner, and will be unique from other, mostly metal sculptures installed throughout the town. But the town has impacted Nina too. She mentioned how welcoming Cary has been and how quiet and serene the area is for her. She also said how you can feel when people love their city and she feels that here. The weather is great, the people have been friendly, and she is enjoying her time here.

If you want to see the work in progress, the artist and her team are very welcoming. Walk on over and say hello, they may talk to you about what they’re doing, if they aren’t too busy building their 12 foot tower. They may even ask for your assistance! If you plan to attend the reveal, park by 6 or 7:00pm to get a good view. Onlookers will be required to stand outside a 50 foot perimeter.

Visit this website to see more of Nina’s past works: Monumental Fire Sculpture

Also in Downtown That Night

FREE concert at 7:30 p.m. by the Cary Town Band at the Cary Arts Center.

As the concert concludes folks are warmly invited to cross the street and partake in the reveal of the Monumental Fire Sculpture. Enjoy S’mores, and hot cider.