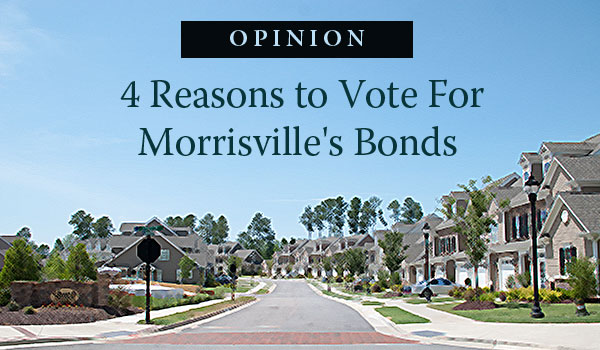 This story by Jackie Holcombe, Mayor of Morrisville, NC. Photo by Hal Goodtree.

Morrisville, NC – On November 6, Morrisville residents will have an opportunity to approve funding for infrastructure improvements and quality of life enhancements in our town.  Two important referenda, one for parks and recreational bonds and a second for street improvements bonds will be before our voters on Election Day.  I will be voting YES on both of these bonds.  Here’s why.

Reason 1:  Morrisville Citizens Have Asked for These Improvements

These projects are important to me because they are important to citizens of Morrisville   Improvements for our parks and addressing traffic issues consistently rank at the top of the list in community surveys, focus groups as well as Council’s discussions with constituents.

Morrisville is one of the fastest growing communities in the Triangle and these referenda allow the Town to address current and future needs directly affecting our citizens’ quality of life.  Many of our community leaders, including the Morrisville Chamber of Commerce, are actively campaigning in support of the referenda because they know they are excellent investments for Morrisville.

There are several ways to finance the construction of major capital projects.

Bond financing is often the most economical means of borrowing money for local governments and a vote of the public is required. This method of financing is used to fund capital projects that are above and beyond the scope of the Town’s annual operating budget.

The current financial climate also offers the Town an opportunity to get excellent financing rates for these important projects.  If the bond referenda do not pass in November, the projects will remain high priorities for the Town.  However, they will not move ahead until an alternative funding is identified.  That alternative funding will likely be at a higher cost to the citizens than bonds.

Council and staff anticipate that a tax increase of up to four cents may be necessary if both bonds pass and are executed simultaneously.  This would equate to an increase of $10 per month on a home valued at $300,000 or about the cost of a lunch out once a month.

In 2004, $13.7M in bond funding was approved for public safety facilities, additional parks and recreation investments and street improvements.  Of that amount, $4M in authorized capacity remains for construction of the RTP Park in central Morrisville.

Bonds Are On the Back

Join me, and support investing in our Heart of the Triangle community.  Mark the BACK of your ballot with two YES votes on November 6th.

For more information on the 2012 Bond Referenda, including a sample ballot, go to www.townofmorrisville.org/bond.  For information about support for the bond referenda, go to http://morrisvillechamber.org/pages/2012MorrisvilleBondReferendum/

Get Your Own Personal Ballot
Scroll to top