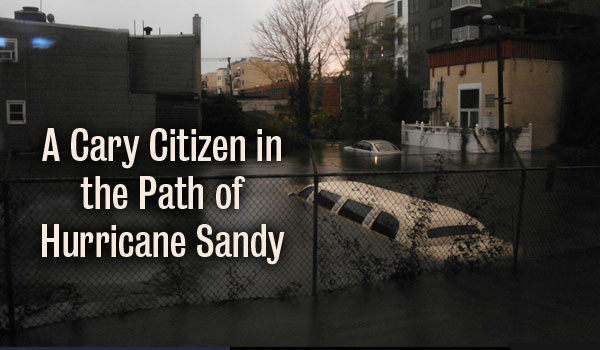 Story by Jeff Strowe, former CaryCitizen staffer who recently transferred to live up North in Jersey City, adjacent to Hoboken. Photo of Hoboken after the storm by Alec Perkins.

Jersey City, NC – When I left my longtime North Carolina home for the New York City area last spring, I figured my life would undergo some drastic changes. Any move brings new challenges and new experiences, but moving within a stone’s throw of the “City That Never Sleeps” brings about its own drastic transformations. The past several months have proved my intuition correct, as I’ve adjusted to the communal rush-hour commute of buses and subways instead of piloting my Jeep around the Beltline, taught myself to substitute “you’se guys” for “y’all” and learned to fall asleep to the sounds of sidewalk chatter and fire truck sirens instead of the soothing rhythms of nature.

What I least expected though, was a visit from a major hurricane, or shall I say “Superstorm”.  That’s a North Carolina thing, right?  However, a “superstorm” is in fact, what we were greeted with  as Sandy barreled through the Northeast with ferocious bluster; flooding the coastline, knocking out power, and unleashing a torrent of mayhem, destruction, and misery on the area’s millions of residents.

When the clouds cleared and the lights shone on the damage, things did not look good. The storm’s wide swath annihilated much of New Jersey’s vulnerable shore, and brought massive flooding to lower Manhattan and various points inland. The dreaded storm surge was particularly unkind to shore front properties in Queens, Brooklyn, and Staten Island.

And though my wife and I were fortunate enough to dodge any damage to our new home, our new favorite neighbors of Hoboken, New Jersey were not greeted with the same fate, as the Hudson River blew right over its banks and into the homes, bars, and restaurants that we’ve come to love and frequent in our short time here.

Power Out For A Week

Another nasty side effect has been the power outages. My wife’s office, located a short drive west in Parsippany was without power until a day or two ago, while my office in Manhattan was in the dark for a solid week.

We were afforded a respite from work, but it certainly wasn’t a vacation, as we sat glued to the round-the-clock news coverage and hoping for improvement and positive steps towards recovery.

Speaking of recovery, we were able to reach out and volunteer at a collection site last weekend in Hoboken. It was beautiful and touching to see the massive donations of food, water, and clothing being sent in droves from places near and far. People are helping those in need to get back on their feet and start to move forward from the damage.

Seeing all that many folks lost makes inconveniences like gas shortages and new public transportation routes seem trivial in retrospect.

It’s going to take a while for things to return to some sense of normalcy, but I’m quickly learning that this area is full of fighters who aren’t going to let Sandy get the last word in.

Not In North Carolina Anymore

Oh, and one more thing. As power is still being restored and debris is still being collected and carted away, Mother Nature bestowed another surprise on us the other day: a good six inches of snow.  We certainly aren’t in North Carolina anymore.

Harold’s Blog: The Election and Other Stories