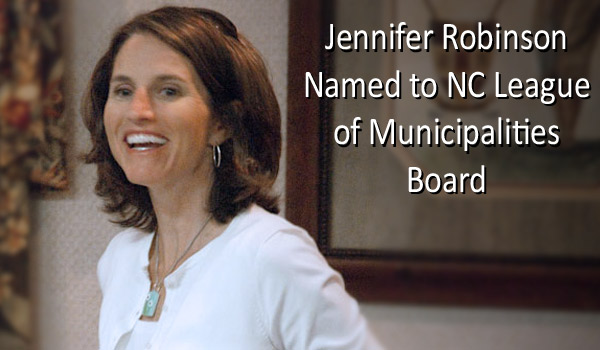 Cary, N.C. – The North Carolina League of Municipalities (NCLM) recently elected Cary Town Council District A Representative Jennifer Robinson to its Board of Directors during the League’s annual conference in Charlotte.

The North Carolina League of Municipalities is a membership association of more than 540 towns. The board of directors is comprised of municipal officials from across the state who are recognized as leaders among their colleagues. The board is responsible for representing the opinions of members when deciding the direction of the League.

For more than 100 years, the League has promoted – and continues to promote – good government by offering non-partisan advocacy, insurance and other services — as directed by its membership.

“We’re grateful to have such leadership in the League,” said Ellis Hankins, executive director of the League. “I look forward to working with the new board each year.”

Robinson moved to Cary in 1995 and immediately began drawing from her experience as a business analyst to research local community issues in depth to dissect complex problems and find resolutions among dissenting parties.

She has served on over a dozen local boards and commissions and regionally represents Cary on the Triangle J Council of Governments, Triangle Transit Board of Directors, and Joint School Board/Cary Council Working Group among others.

Selling a House Over Christmas
Scroll to top