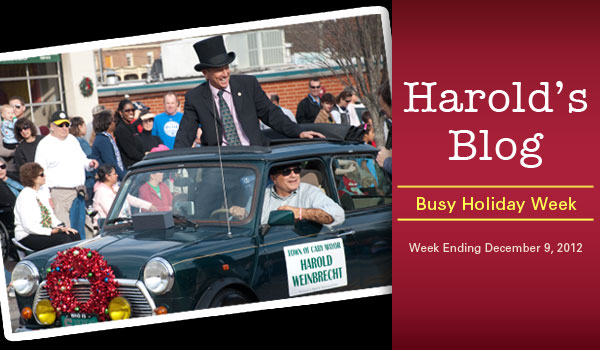 Cary, NC – Tis the holiday season and it was a busy week full of events.

Monday I met with the town attorney to go over all the town’s major law suits. There were no surprises and I hope the town has good news to report about some of them in the near future.

Tuesday I met with the town manager for about an hour. We discussed mostly issues related to downtown including the theater and the “opportunity site” across from the Cary Arts Center on Academy Street.

Wednesday morning started with a short TV spot on WTVD’s 26th Heart of Carolina food drive. In my one minute spot I urged Cary citizens to drop off nonperishable goods for the NC food bank. If you missed it and still want to donate or get involved go to http://www.foodbankcenc.org and see how you can get plugged in.

The annual town employee luncheon was held on Wednesday. I, along with council members Yerha, Robinson, and Smith shook hands with each employee as they went by to be served their lunch.

We shook hands with 654 of our employees out of roughly 1125 (some had to stay on the job to keep the town running). I had the honor of thanking them for their service to the town along with the town manager and others.

The town also named its employee of the year at the luncheon. This year it was Jay Schubert who leads special events for the town such as Lazy Daze, Diwali, downtown performances, ground breakings, and more.

Congratulations Jay and to all the town’s employees for helping make Cary one of the greatest places to live in the America.

Wednesday night I attended the Citizens Assisting Police (CAP) team dinner. I was joined by council members Smith and Yerha. After dinner I had the privilege of addressing those in attendance. Here is an excerpt from my comments:

“…Around this time every year, a national publication ranks the safest cities in the country. While this year’s results have yet to be announced, we have no reason to believe we won’t outshine the country. After all, we’ve been recognized for thirteen consecutive years. Last year, the Town of Cary was ranked the safest municipality in North Carolina and the southeast region; we were named the third safest in the country by population and 11th safest in the nation over all.”

That is a lot to brag about. And when we think of safety, we think of having enough police officers, fire fighters, and other paid staff to do the job. But as you know so well, we can’t do it alone. They need our help; your help.

I was amazed to find out that as a group, the CAP Team gave over 4,000 hours of your time this year to support Cary Police. Those are hours you could have been with family or friends, or just relaxing. Yet you chose to share your energy, knowledge and expertise to make our community a better place. Your time is valuable, and we very much appreciate you sharing it with us. …”

In Cary we are so blessed to have so many volunteers that care about their town. CAP volunteers are rapidly approaching a one to one ratio with our officers. That is tremendous support and one of the reasons why we are such a great town.

Thursday I substituted on the town council’s operation committee to take the place of a council member who was out of town.

There were six items on the consent agenda that were recommended for approval without discussion. There were five discussion items. The committee recommended the contract award for roundabouts at East Chatham and East Durham Road and at West Chatham and Old Apex Road. The bid is $700,000 under budget (It will be interesting to see if our local newspaper will write a story about that since that spent so much time writing about the project we had over budget).

Will also recommended approval of the sale of utility bonds for the new wastewater plant, the recognition of the bond results from the last election, some parking on Keisler Drive, and changes to the encroachment ordinance.

After the committee meeting I attended a staff meeting to discuss a variety of projects.

We discussed future intersection improvement options at High House and Cary Parkway – we are sticking with traditional. We also discussed a proposal from the Bradford project at Davis Drive and High House. The developers are now trying to bring a grocery store to the project with a sea of parking – very disappointing.

There was also discussion about the Tryon Greenway. To complete that project will require changes to the dam which will require lowering the lake and that will make folks around the lake unhappy. Other items discussed included a potential partnership with Chatham County on a project.

One bit of news in our discussion was future plans to move the water tower across from Cary High School to another location. This will be sorely missed since the “Class of …” is always on the tower. We will have to figure out another way to recognize our senior high school students.

Saturday I had the honor and privilege of riding in the Cary Jaycees Christmas parade. I rode in a mini coupe driven by Steve Zaytoun.

It was a blast and I threw out about three bags of candy to the kids. The parade was fantastic with floats, bands, and several performances. The weather was perfect so attendance was great. I am already looking forward to next year’s parade.

Sunday I visited the 2nd annual Jewish Festival being held at the Cary Arts Center.

I, along with council member Bush, met with the Deputy Consul General from Israel to the Southeast. She had come from Atlanta to visit the festival and to talk with us about future cultural and economic opportunities with Israel.

After a great discussion we agreed to work on trying to get a dialog started and investigate initial steps of a sister city relationship.

The Jewish festival was great with educational opportunities and crafts. Cary is blessed to have this, as well as other, cultural festivals that celebrate our diversity as a town.

There were several emails from staff and other government agencies.

The work is the start of a $2.7 million project to tear down the bridge, eliminate the curved roadway at that location, and re-align Hillsborough Street so it has a right-angle intersection with Western Boulevard.

The two-year extension will mark seven consecutive years the championship is at USA Baseball National Training Complex in Cary, N.C., making it the third longest run in the 45-year history of the NCAA II Baseball Championship.

Cary staff announced four topics for the council-staff retreat to be held January 18th and 19th in New Bern:

Cary staff also answered citizen questions which may be of interest to others. One question was why the town did not use Recyclebank. Staff responded with:

Staff also responded to a question about whether or not new water heaters require inspection. Staff responded with:

Best & Worst of the Emails

Emails from citizens bring out the best and worst from people in the holiday seasons. The comments are incredible on both sides. On the nasty side one resident said:

“This place is stinking vomit…you have a minimum consideration of the people…”. On the nice side: “Thanks for all the wonderful things you do for Cary.”

Email topics included complaints about the proposed Mayton Inn concept drawing, concerns about the Morrisville Parkway closing, a complaint about the dump at Dixon Avenue, and several invitations to events.

Next week will continue to be busy. It will include a stormwater master plan work session, a town council meeting, the taping of 2013 State of the Town, a meeting of the Economic Development Committee, two performances from two different ballet companies.

Well that is all for this week. My next post will be on Sunday December 12th. Please feel free to email me with a comment. Email all Town of Cary questions or comments to  Harold.Weinbrecht@townofcary.org. Email personal comments to augustanat@mindspring.com.

Fitness: The Buddy Advantage for the New Year
Scroll to top