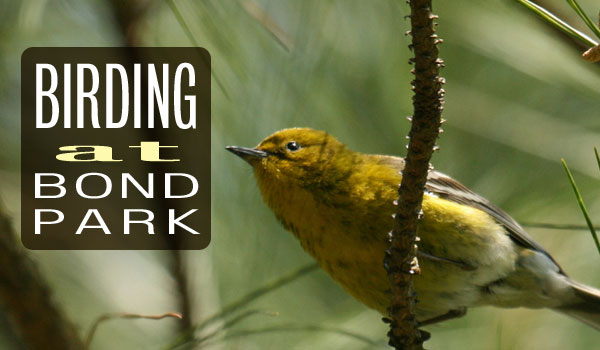 A Walk with a Naturalist

Eddie Owens two-hour “Bird Walks in Bond Park” class is offered through the Town of Cary Parks, Recreation and Cultural Resources.  During each walk Owens guides participants to favorite places in the park and demonstrates how birds can be located with simple techniques.

On January 12th, I enjoyed a parade of wonders under Owens’ lead.

The 42-acre lake is a magnet for species like Double Crested Cormorants, Pied Billed Grebes, and Ruddy Ducks.  Even Bald Eagles (we spotted an adult male) can be seen over the lake several times a week, according to Owens.

There are also ample woodlands where species like Hermit Thrushes, Pine Warblers, and Yellow Bellied Sapsuckers are likely to be found.

The 310-acre park also abounds with wet places like the creek branch along the park’s southeastern border.  Here we found a Belted Kingfisher, a Red Shouldered Hawk, and a Winter Wren.  Even more birds can be found along woody edges like the Black Creek Greenway corridor.  Many birds, including Carolina Chickadees, Brown Headed Nuthatches, and White Breasted Nuthatches find edges attractive places to feed while avoiding predators.

Other habitats that make Bond Park a birder’s paradise are meadows like the one adjacent to the beaver bond in the park’s southeast corner.  We discovered Eastern Bluebirds, Eastern Phoebes, White Throated Sparrows and Yellow Rumped Warblers in these sites.  And there are homes around the park which draw backyard-friendly species like Cedar Waxwings, Northern Cardinals and Pine Siskins.

The trick to finding birds at Bond Park is alertness.  We made spectacular discoveries by following clues others might overlook.  A splatter of guano on the ground on the Lake Trail invited us to look straight up a Loblolly Pine where we found a Barred Owl.  The cawing of aggressive American Crows led us to a Great Horned Owl: a bird Owens hadn’t previously found at the park.  And songs unique to each species helped us locate tough-to-spot birds like Brown Creepers and Golden Crowned Kinglets.

The best way to make such eye opening discoveries is to walk the park with experienced guides who can teach new skills in identifying birds.  “Bird Walks in Bond Park” offers those possibilities.  And keep looking up!

Look in the Cary Parks and Rec Guide for this and other enlightening course- you just might learn something that could lead to a lifetime hobby.