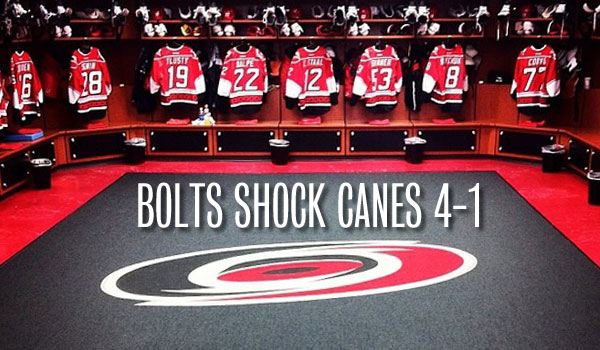 Raleigh, NC – The Carolina Hurricanes lost their home opener to the Tampa Bay Lightning the same way they lost their season opener, 5-1 at Florida.

The slogan ‘It’s Time’ was echoed numerous time around the PNC Arena before the game as a number of Caniac fans, after waiting for the doors to open, were all smiles, giving high fives and had an occasional shout of ‘Let’s Go Canes’.

Yes, it’s time for HOCKEY, but the Canes performances in their first two games might mean they didn’t get that memo. They were too easily pushed off pucks and weren’t taking the body as mush as Tampa Bay who is anything but a physical team.

The Canes came out strong, winning the opening faceoff and held the puck in the Bolts end with Tim Gleason getting off the first shot at home.

Each line got an early shift with the fourth line of Jeremy Welsh, Kevin Westgarth and Tim Brent having an impressive first time on the ice.

Welsh used his size, reach and maybe a little intimidation to win a puck along the sideboards.

At 14:42, Vincent Lecavalier made a great lob as if he was a pitcher in slow pitch softball to Tom Pyatt who outskated Bobby Sanguinetti to bat the puck out of mid-air past Cam Ward for a 1-0 lead.

The line of Eric Staal, Alex Semin and Drayson Bowman showed energy and excellent puck possession but couldn’t get any shots on net.

At 8:24, Lecavalier grabbed the puck in the corner and went straight for Ward for a stuff. Ward made the initial stop but Cory Conache had position on Sanguinetti for the rebound giving Tampa Bay a 2-0 lead and silencing the beyond sellout crowd of over 18,600. I believe this is the largest non-playoff attendance since the Canes have been in North Carolina.

The early 2-0 deficit was too familiar to the season opener. Later in the period, B.J. Crombeen took a dumb offensive zone penalty .  The first unit power play of Jeff Skinner, Eric Staal and Semin were impressive but had very few shots.

Jordan Staal got in the scorer’s sheet by taking a soft penalty by just having his stick on the ice in the right spot but at the wrong time causing Martin St. Louis to trip. The Canes penalty kill team did a far better jib than the man advantage team as they did not allow a shot on net.

The Canes came out with fire in their eyes for the second period.  Coach Kirk Muller must have told them to have aggressive play and the Canes responded with the Bolts taking 2 penalties within 2 minutes giving the Canes an abbreviated 5 on 3 advantage.

On what should be a common scoring combination, Jeff Skinner scored with assists from Jordan Staal and Semin.   The Canes needed to build on that goal but actually seemed to lose steam.

About 5 minutes into the period, Justin Faulk showed some nifty offensive skills as he picked up the puck along the half board, drove around the net and had a wrap around stopped by a sprawling pad of Mathieu Garbon.

Ward has always been a third period player and the second period tonight was his third of the season and made some outstanding saves. On one he came out of the crease about 6’ to his left and made a kick save into section 130.

A short while later, Lecavalier made a cross ice pass to the right point where Victor Hedman  put an innocent shot into traffic.  Ward had the right position and made a stick save, steering the puck to the boards.  That would never make a highlight film but that had goal written all over it.

The Canes lost their spunk at the start of the third and may have let no-calls affect their play.

After some body slamming, a Bolt landed on Ward for a no-call on goalie interference, then a trip in the corner for another no-call.  There were no shortages of refs in the stands wearing Canes’ sweaters.

After the Canes couldn’t clear the defensive zone,  allowing Brendan Mikkelson to feed Keith Aulie, who methodically  skated to his left and sent a wrister over Ward’s right shoulder for a killer 3-1 lead.

The top 2 Canes forward lines had a lot of ice time in the third as the Canes desperately need offense. Halfway through the period Jussi Jokenin took his second penalty with a hook in the offensive zone.  Coaches hate offensive penalties, especially late in a game in which your team is behind.

Tampa Bay wasted little time icing the game when Ryan Malone put in an easy rebound into an empty net.  The Canes need to get tough and check the opposing teams tight to give Ward some support.

After a Tampa Bay clear on a Canes power play, Eric Staal took exception to an elbow upside the head and tried to get the team and fans excited by enticing Adam Hall to do the dosey-doe.  Eric Staal needs to stick to scoring, not roughing.

A very rough start for the beginning of a shortened season.  Only saving grace: it’s just 2 games into the season but the defense needs to toughen up a good bit more.  The offense sorely misses Tuomo Ruutu and Zac Dalpe banging bodies.  Too many Canes were too easily pushed off the puck, names will go unmentioned.