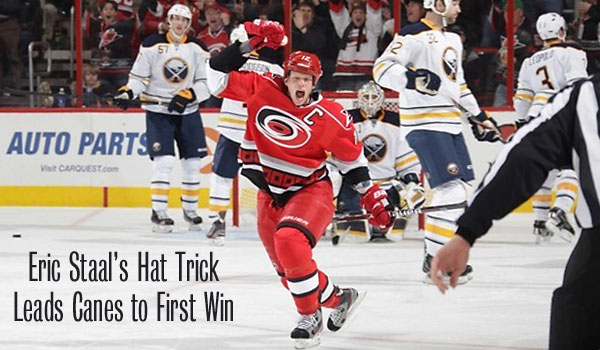 Raleigh, NC – Captain Eric Staal had the 13th hat trick of his career Thursday night as the Carolina Hurricanes won for the first time in this abbreviated season in a 6-3 over the Buffalo Sabres. It was a total team effort, with the defense having its best game of the season and the offense opened up for the scoring that has been expected.

The Canes came out strong as Staal won the first faceoff and within 4 minutes had 6 shots on net challenging Jhonas Enroth on several shots.

Jeff Skinner got called for tripping when he was on his back. This looked like a payback for ending up on his backside in the first place.  As what happens all too often, the second guilty party gets the call.

The Canes man-down defense did extremely well as the short forwards had 2 shots on Enroth and the Sabres power play unit failed to get a shot off.

At 8:50 the Canes had their first power play, a very good puck possession, but couldn’t put one on net.  It’s just a matter of time before this unit starts lighting the lamp.  On paper, this power play unit in among the top 5 in the NHL, but they have to start getting stats on the score sheet.

Aggressive play by the Canes must have been the marching orders by Coach Kirk Muller. Drayson Bowman had a hard check along the center boards  but the refs thought it was too aggressive, sending Bowman to the box for 2 minutes. The man-down unit did another very effective job killing the penalty allowing just one weak shot.

The Sabres and Canes exchanged penalties late in the period with both teams coming up empty in their power plays. The Canes only were able to get one more shot on net for the rest of the period as the Sabres stepped up on defense.

When Canes announcer John Forslund gets all excited about a great play, he frequently yells out ‘That’s Hockey Baby!  He must have been hoarse by the end of the second period as it was one of the best periods of hockey I’ve seen played in a long time.

After the second I ran into Cary resident John Hylwa who was beaming and said “was that something else, that was fantastic hockey both ways.” He was more than right. If you like scoring, you loved that second period as the Canes had 4 goals and the Sabres 2.  All good goals, no garbage or cheapies.

The Sabres tried to come out hard in the second but couldn’t generate any significant threats as the Canes did a great job checking.

Early in the period the Canes were attacking hard in the Sabres’ end. Jordan Staal had the puck down low, passed out to the edge of the faceoff circle to Zac Dalpe for a quick one-timer on net. Skinner picked up the rebound and put a nifty backhander in the upper corner.

Later in the period to help the Sabres, Pat Dwyer got called for the softest interference penalty in the history of hockey. Cam Ward was solid in net as he stopped 3 shots on the power play that all had goal written all over them.

On the power play, Jordan Staal intercepted a pass, sent it over to Justin Faulk  who carried the puck quickly to the Sabres end with Staal and Juir Tlusty on a 3 on 2.  Faulk wound up taking a hard slap shot that went inder Enroth’s pads for the Canes first short-handed goal and giving the Canes a 2-0 lead.

A few minutes later with play in the Canes end, Dan Ellis made a pad  save on a slap shot from the point but the rebound was a sitting duck for Cody Hodgson to put home to cut the lead 2-1.

Less than 2 minutes later, Christian Enroff was on the left point and made a beautiful pass to Jason Pominville for a tip in from the dirty area of the slot awakening the Buffalo fans with the earned reputation.

The Canes responded with getting back to their aggressive play.  With the puck loose behind the Sabres net, Skinner  fought off 2 defenders, grabbed the puck and magically was able to send a wraparound in the net.

On the ensuing faceoff at center ice, Eric Staal won the faceoff back to Jamie McBain who passed over to Joni Pitkanen.  Pitkanen saw Staal  up ice and hit his tape perfectly.  Staal drove to the net with a defender all over him, fakes a forehand, waited ever so slightly then stuffed the puck under Enroth for a commanding 4-2 lead.

At 6:06 Thomas Vanek had a great behind the back pass to Pominville who buried a shot high stick side on Ward to cut the lead 4-3. That goal gave a boost to the Sabres as they became the more aggressive team.

Hodgson had a point blank shot to Ward’s left but Ward made an unbelievable stop. That stop seemed to turn the tides as the Canes stepped up their play.

Pitkanen had the puck on top of the face off circle to Enroth’s right and made a cross ice pass to Eric Staal.  Staal collected the puck and sent a wicked wrister in the upper right to give the Canes a strong 5-3 lead.

Dalpe, who sat out the last game due to illness, showed no signs of fatigue as he had an excellent game.

With about a minute and a half left, Buffalo pulled their goalie and the Canes wasted little time making them pay.  Dalpe picked up the puck in the Canes end, passed it to Eric Staal in center ice who let go a 90’ shot for his 13th career hat trick.

Great team game, great team win.  First of hopefully many more to come. For those that were at the game, they experienced an exciting game and during a TV timeout saw a surprise, and emotional, reunion of a soldier coming home to his wife.