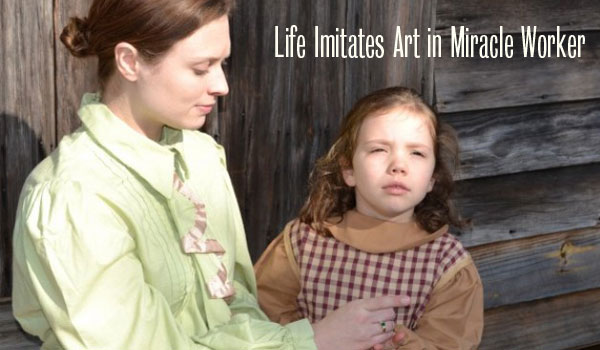 Story from staff reports. Photo by Debra Grannan. (L–>R) Kirsten Ehlert and Ashton Layh in the Cary Players production of The Miracle Worker.

Cary, NC – In an unusual bit of casting, real-life teacher and student play the roles of teacher Annie Sullivan and student Helen Keller in The Miracle Worker, opening this week at Cary Arts Center.

Ms. Ehlert was delighted to learn that one of her students was being considered for a part in the same play for which she, herself, had auditioned. “I didn’t realize that Ashton had auditioned until I saw her name on the call back list.” Ehlert explained. “We were there on different days so it was a pleasant surprise.”

Ashton Layh wasn’t aware that her teacher had auditioned for the same play either, until Ms. Ehlert mentioned it at school. Once the cast list was finalized, the Art teacher at school shared the exciting news with everyone during morning announcements.

Since rehearsals began, teacher and student have gotten to know one another much better. “Anne Sullivan and Helen Keller’s relationship was always a physical one, with Anne spelling words into Helen’s hands as she taught her” says director, Tina Vance. “They were also very combative, so Kirsten and Ashton are exploring new experiences as actors that would not be common or appropriate in a typical classroom.”

Both teacher and student agree that it’s taken time to get comfortable relating to one another on such a different level. “I told my friends at school that I get to lock Ms. Ehlert in a room and I get to slap her!” Ashton explained with a giggle.

Steve Whetzel, the fight choreographer is close-by to be sure the blows look realistic and that no one gets hurt.

This is director Tina Vance’s third show with Cary Players. She directed the delightful comedy Over the River… in 2011 and the popular Agatha Christie mystery And Then There Were None in 2012.

Ms. Vance and her husband Glen have also designed the set for the show.

Note: The performance on Sunday, February 3rd will be audio described by Arts Access.