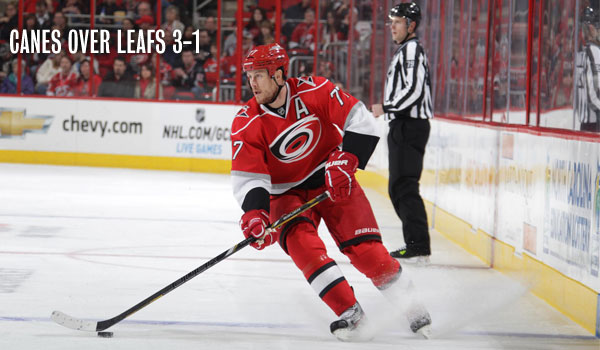 Story by Bob Fennel for CaryCitizen. Photo from the Carolina Hurricanes on Facebook.

Raleigh, NC – The Carolina Hurricanes came home to face the Toronto Maple Leafs on Valentines Day after a very successful road trip. . The Caniacs loved the result, a strong, 3-1 win over the surprisingly good Leaf team.

The Canes garnered 9 out of a possible 12 points on the trip  going 4-1-1 and more importantly went from being out of a playoff spot to first in the Southeast division and third in the Eastern Conference.  It was the 250th Cane win in Raleigh.

The Canes were without Joni Pitkanen and Tim Gleason due to injuries, calling up Michal Jordan from the Checkers for his NHL debut. Coach Kirk Mueller sat fan favorite Chad LaRose and had both Tim Wallace and Kevin Westgarth in the line up.

On the first faceoff in the Canes end,  Westgarth and Colton Orr dropped the gloves for a solid heavyweight bout earning 5 minute majors. The first half of the period had few shots by either team with the Leafs thwarting any Cane attack by icing the puck six times in a 5 minute span.

Alex Semin slashed the stick out of a Leaf’s hands for a 2 minute minor.  The Canes man down defense has been soft lately and with two of the top defenders out, this could have set the tone of the rest of the game.

The defense responded nicely with the only real threat is when goalie Dan Ellis heard the sweet sound of the puck hitting solidly on the pipe while saying ‘knew it was wide’.

Eric Staal had the best shot during the Leafs’ power play, carrying the puck down ice forcing Ben Scrivens to make a glove save.  After the faceoff, the Leafs cleared the puck nicely out of their end and had a potential 3 on 2.

Jay Harrison looked like a traffic cop directing teammates who to cover while slowing the play with excellent position.  Just when a shot was taken, Harrison used his long reach to deflect the shot out of play.

Very late in the period, Harrison again used his reach to break up a pass that would have led to a 3 on 1.

Fire Power in the Second

The second period started out with much of the play between the blue lines with each team getting only 1 shot in the first 5 minutes.  The Canes first line then took control.

Semin and EStaal kept the puck low and Toronto tried to clear the puck with a desperate clearing pass.  Joe Corvo stopped the puck inside the blue line, dumping it in the corner.

EStaal grabbed the puck behind the net, tried to go forward but was taken down.  While half on his knees and side, managed to swipe the puck to the front of the net. After bouncing off a defender to the high slot, Corvo jumped on the loose puck for a quick one timer to put the Canes up 1-0.

On a simple play in the Canes end, Bobby Sanguinetti got called for interference. The Canes man down unit hasn’t had great success recently and tonight wasn’t any different.  Dion Phaneuf let go a hard slap shot from the left point that bounced off 2 players, ending up in the net, tying the game at 1-1.

Jussi Jokinen put the Canes up 2-1 with his second power play goal in as many games. Corvo started the attack out of his own end, passing up to Jokinen who brought the puck across the blue line.  Toronto collapsed the defense on the puck in the high slot causing the puck to squirt out.  Jeff Skinner got mugged as he was just about to shoot causing the puck to go to the right of the goal.  Jokinen was there for a shot requiring skill to find it’s way to the back of the net from the bad angle.

Harrison was just about to jump on the ice for a shift change with Jamie McBain.  Seeing the Leafs had a rush, McBain stayed on the ice and was able to steal the puck then shove it up to Skinner.  Skinner went right for the net taking a shot that Scrivens tried to smother on the ice but lost control.  Jordan Staal jumped on the puck inside the right faceoff circle and calmly chose his corner to bury the puck in the net for a 3-1 Cane lead.

The Leafs started the third down to 3 skaters as there was a skirmish at the end of the second.  The Canes looked good on the 5 on 3 powerplay but couldn’t put the puck in the net for the knockout punch. Give the Leafs defense credit as the Canes were pounding the net with several good scoring chances.  The powerplay unit may not have scored but they were really fun to watch by the sellout crowd.

Midway in the period, Semin pickpocketed a Leaf in center ice then took the puck into the offensive zone, winding up for a Nolan Ryan fastball type shot that Scrivens stopped with his pads.  On the next play up in the Canes end, EStaal made a great reach to deflect a Leaf’s pass that would have lead to a clear breakaway.

Harrison had a hat trick on blocking shots with his condor-like reach in the third.  Which ever Canes coach is emphasizing stick positioning, is having that direction followed as it’s evident on how well everyone is concentrating on blocking lanes. Great team win the Caniac fans had to love on Valentine’s Day.

What’s Up Downtown on Thursday
Scroll to top