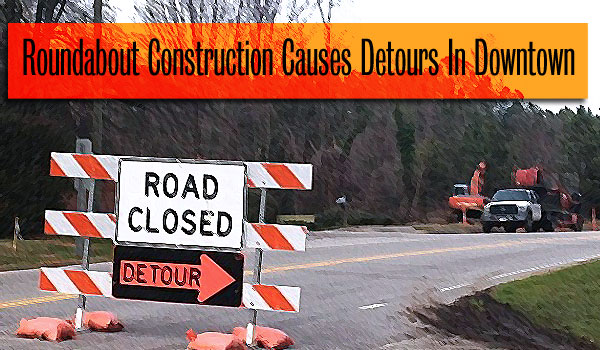 Cary, NC- If you have recently driven into Downtown Cary from the west side of town, you have been sent on a detour through quiet streets you never knew existed. The Town is currently under construction on 2 roundabouts to eliminate the forks in the road at Old Apex and West Chatham, and at Durham Rd and East Chatham. When can drivers expect relief?

The official Town webpage for the project lists construction to be finished “Spring of 2013” and the hard hat crews moved in 2 weeks ago.

With the weather we have had this winter and spring its hard to tell. Construction crews were at a stand still for Monday’s downpour. I spoke with Kyle Hubert, Town of Cary Project Engineer for the work and he is hopeful that completion of

“the W Chatham Roundabout (will be) around the end of April.  Weather is challenging this time of year and we have run into a few surprises digging around in an older section of Town… ” Kyle added, “This is phase 1.  Phase 2 should start in early April and include working on the existing open west bound lane of Old Apex.  This will require changes in the traffic control. We  hope to be done with the Western roundabout in late April if things work out.”

Both sites are scheduled to be completed by summer 2013. The two locations are highlighted on this map. For more information, download the December 2012 project newsletter which includes birdseye views of both projects.

Purpose of the Roundabouts

Years ago similar projects were planned to create a physical gateway leading into the core of our Downtown. The former layout of these intersections were actually forks  in the road with some very unsafe left hand turns. These will be eliminated, in favor of single lane roundabouts. The projects are not just road construction, but will serve to beautiful and unify the opposite ends of the downtown, with plantings sidewalks and medians. 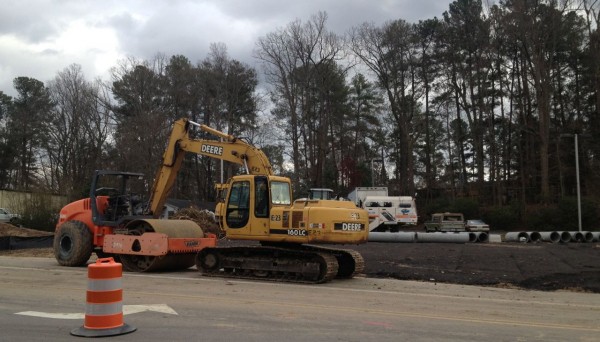 Where are The Detours?

Access to businesses near the roundabouts will be maintained throughout the construction process. Traffic detours have been developed to help expedite the construction in order to minimize disruption to travel and businesses. The main businesses to be effected are Franz Automotive and Havanna Grill near Dixon Ave on West Chatham along with the gas station directly in the intersection. Havanna Grill has posted a large sign to be seen as drivers exit the downtown area. On the East side, the Dutchman will have construction virtually on their doorstep.

For drivers the disruption involves learning new ways to either get to downtown destinations (I am favoring coming in from Chapel Hill Road) or figuring out how to avoid the area all together. If all goes according to plan, the detours should be over before summer and the busiest season- August’s Lazy Daze Festival. 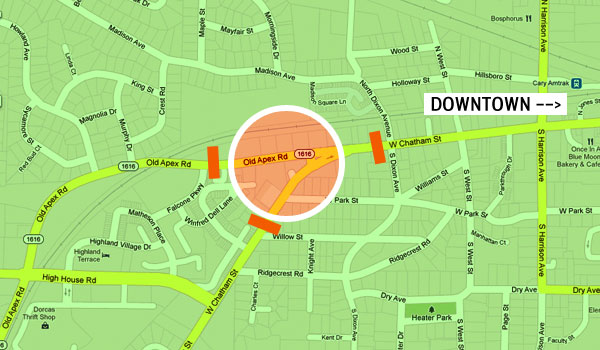 The roundabouts were originally envisioned in the Downtown Streetscape Plan, adopted by Cary Town Council in 2006. Much of that plan was scrapped in 2009 during overwhelming budget tightening and reduced revenues. However, the silver lining is that the town proceeded in 2011 with grant applications from CAMPO (Capital Area Metropolitan Planning Organization) which is funding  half the project which has come in under original budget.

This week’s Downtown Coverage is sponsored by The Heart of Cary Association whose mission is to is to preserve, enhance and promote the fundamental character, charm, diversity and prosperity of the Downtown business community as well as its adjacent residential neighborhoods.