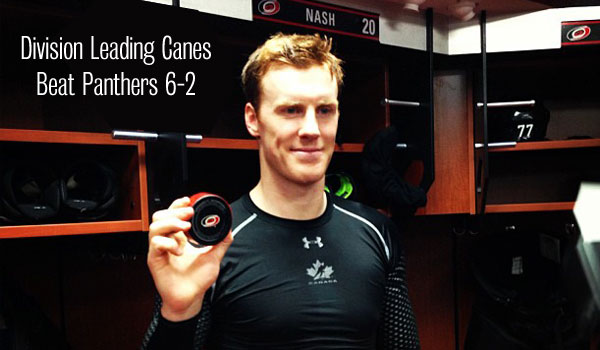 Raleigh, NC – The Carolina Hurricanes were able to get revenge for the opening day loss to the Florida Panthers, beating the Panthers in a commanding 6-2 win March 2 at the PNC Arena.

Joni Pitkanen returned to the line up after being out 7 games due to a lower body injury.  In an interview with CaryCitizen at Thursday’s game, Pitkanen said he was ‘coming along’ with a broad smile but never committed he’d be in action in just 2 days.  Tim Brent possibly came back too early as he was out again with a lower body injury after playing just 1 game.  Another big accomplishment was Carolina was finally victorious over a Southeast division team, going 0-5 before tonight’s success.

Jose Theodore, the Panther’s goalie, only lasted 2:22 as he went down for a save against Jussi Jokinen.  Theodore has been known to have knee problems and while it was a good shot by Jokinen, it was a routine save.

The Canes were passing well, keeping the puck in the Panthers end. Riley Nash was tied up along the boards but managed to hit the puck in the air over to Jokinen on the inner perimeter of the faceoff circle, with Jussi sending a one timer high glove side for a pretty goal on the first shot on new keeper, Scott Clemmensen.

With 11:21 left in the period, the Canes struck again. With excellent forechecking, the puck stayed in the Cats’ zone.  Alex Semin had the puck along the half board, passed to Juri Tlusty in the high slot.  Despite a defender in good position, Tlusty managed to get off a strong shot that found the net on the right side of Clemmensen.

About a minute later, the Canes third line was back on the ice.  Nash won the puck along the near boards, and then passed to a wide-open Jokinen who notched his second goal of the night from 30’ out.

After one of the few forays in the Canes end, Tim Gleason cleared the puck up to Joe Corvo in the neutral zone.  Corvo carried the puck into the Cats end, softly dropping a pass to Semin.  Semin got off a rocket but Clemmensen made the save.

With 2:19 left, the Canes had their fourth line on the ice.  The Panthers had their best offensive push with a shot that Ward made a pad save, directing the rebound to the corner.  Shawn Matthias got the puck in the left corner, skated behind then circling the net, turned and got off a wrist shot to the high glove side of Ward to cut the lead 3-1

Panther Coach Kevin Dineen must have had some choice words in between periods as the Cats came out with fire in their bellies. The puck was in the Canes end a good portion of the first 2 minutes.

The Canes woke up and continued where they left off in the first with pressure on Clemmensen. Pitkanen must have aggravated his injury, as he did not come back in the second.

On a weak 2 on 1, Nash carried the puck over the Cats blue line with Jokinen on his left.  Nash held the puck, fooled the defender so much the defender went down to block the shot but Nash did a toe drag, then sent a shot off the right post coming oh-so-close for his first NHL goal.

On the third line’s next shift, Nash grabbed the puck in the Canes end, passing up to Pat Dwyer.  Dwyer went through the neutral zone then over the Cats blue line with just one defender back and Nash skating hard up the left side. Dwyer elected to pass rather than shoot and made a beautiful saucer pass to Nash’s tape for a pretty goal giving Nash his first NHL goal. Nash went in hard against the boards after the shot but was too elated to feel the pain.

The Panthers had a hard time clearing the puck as Semin intercepted a clearing attempt at the blue line.  Semin found Eric Staal on the goal line, who deeked a defender, skated to the crease then sent a fore-hander in the net to give the Canes a commanding 5-1 lead.  The Canes had another powerplay but never really had any scoring chances.

Very late in the period, the fourth line was on the ice as Florida was pressing hard taking shots from close range.  Ward made 2 great saves to his left with the puck rebounding to the right.  Tim Wallace made a heads up play covering the net while Ward recovered to the net taking away a sure goal with an unbelievable save.  With less than a minute to play Filip Kuba scored on a slap shot from 55’ out to close the lead 5-2.

The teams started the third with 4 on 4 because of roughing penalties for Justin Faulk and Steve Weiss.  No real scoring threats emerged for either team as both teams were checking very close.

Shortly after the penalty ended, Faulk had a solid hit behind the Panther’s net.  On his way up ice along the boards in front of the Panther’s bench, Faulk was tied up by a defender then Weiss came in with a high elbow to Faulk with the intent of finishing their differences from the second period penalties. Faulk obliged and in a hockey code of fair fighting, removed his helmet as Weiss already lost his from a blow by Faulk’s right hand.

When play resumed, on sheer determination, Semin kept the puck in the left corner away from 2 defenders.  As Semin made his way along the boards, he found EStaal cutting to the net.  Staal had a quick shot that caught Clemmensen off guard as it hit the goal stick ricocheting into the net for the final score of 6-2.

Special notes: this was the 500th game in the PNC Arena building and was also the 6th sellout of the 9 home games this year. The Canes are averaging over 2300 more fans per game than last year.