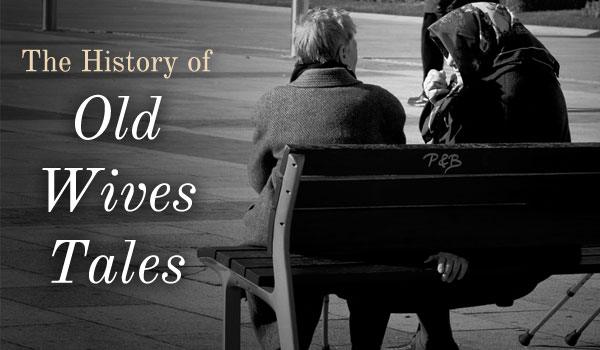 “Some of those old wives were pretty smart.” Charlie Brown, “Peanuts,” Charles Shulz

When we were growing up, to call something an “Old Wives’ Tale” meant that the idea was at best untrue and at worst superstitious nonsense that cast doubt on the speaker’s ability to navigate the modern world.

According to “Wikipedia,” old wives’ tales “originate in the oral tradition of storytelling….to teach lessons and make difficult concepts like death or coming of age easy for children to understand.”

Another website, “Wonderopolis” defined it as older women passing down advice “in the form of sayings that were easy to remember.” We wondered which old wives tales were true or at least had a rational basis in terms of knowledge that was available at the time.

Most of the sayings are about love, luck, fortune, cures for sickness and the weather.

We consulted Harry Oliver’s book, “Black Cats and Four-Leaf Clovers,” and found that good luck abounds in the form of four leaf clovers, mince pies, rabbit’s feet, moles feet, horseshoes, charms made of bat bones, and throwing old shoes after someone who is leaving.

The call of first cuckoo bird of spring is also lucky, but you have to hear it on your right side and not while looking down. Good luck is complicated.

Harry Oliver claims many superstitions have rational origins, when placed in their historical context.

Lighting three cigarettes with the same match is considered bad luck. This goes back to war time, especially to WWI, when the light from a match lit that long made the third soldier a target.

A hat placed on the bed is considered extremely unlucky but goes back to a time when doctors made house calls. Upon entering the household of an extremely ill patient, the physician would rush to the bedside without shedding his hat and place the hat on the bed. A hat on a bed became synonymous with a grave illness.

Spilling salt, another sign of bad luck, goes back to a time when salt was scarce and expensive and spilling it was discouraged.

Some old wives tales are rooted in the concept that food is medicine, which modern scientists support.

Chicken soup, it turns out, is good for a cold and eases many of the symptoms. Old wives’ were right on carrots improving vision because of high levels of beta-carotene. In the saying, “An apple a day keeps the doctor away,” scientists have found apples help break down cholesterol and contain phenol which protects DNA.

We asked people if they remembered advice passed down by women in their families.

“Even castles have spiders,” was a saying Betty Cloer Wallace’s mother said to advise that nothing is ever perfect. Betty Gribble Shuler Accord remembers the saying, “Be careful what you pray for, you may get it!” Kathryn Boyd Langrehr was advised, “Can’t never did anything” and Christina Gardner Todd was cautioned by her grandmother, “If you can’t say something nice, don’t say anything at all.”

Roberta Mason Hensley and Bonnie Bridger-Mittelmaier value the proverb, “A stitch in time saves nine.” Ken Neill liked, “I didn’t fall off the turnip truck yesterday,” when negotiating a better deal. Rick Franklin remembers, “If you sweep the corners and keep them clean, the rest of the floor will take care of itself.”  Erford Harrison’s favorite old saying, “The Sun does not shine on the same dog all day long,” was passed down from women in his family.  “Half a loaf is better than no bread,” encouraging compromise may be a saying our political leaders have forgotten.

We think Charlie Brown had it about right; “Some of those old wives were pretty smart.”

Gordon Mercer is past president and on the Board of Trustees of Pi Gamma Mu International Honor Society and professor emeritus at Western Carolina University. Marcia Gaines Mercer is a published children’s author and columnist.