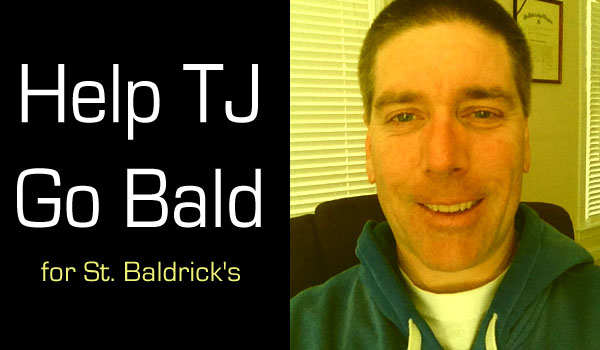 Cary, NC – TJ Cawley, a longtime reader of CaryCitizen, has pledged to shave his head to raise money for charity. Help him reach his goal.

A Guy Who Wants to Go Bald

Most guys don’t want to go bald. We try creams, tonics and fancy haircuts to hide the cruel advance of baldness.

Not TJ. He’s getting his head shaved on April 6.

But it’s for a good cause – the St. Baldrick’s Foundation to fight childhood cancer.

We’ve written about St. Baldrick’s before. It all started just thirteen years ago at a bar in Manhattan. Instead of the usual St. Patrick’s Day debauchery, a bunch of friends decided to get shaved and raise money to fight cancer in children. That first year, they raised $104,000. Thus, St. Baldrick’s was born.

In 2012, St. Baldrick’s volunteers raise more than $30 million. The event has gone worldwide, with hundreds of events and tens of thousands of bald heads.

TJ Cawley wants to be one of them.

St. Baldrick’s events are like big parties – laughter, trepidation, food, fun for kids. TJ’s event is at Ruckus Pizza in Morrisville on April 6 at high noon. You don’t have to be there to donate, so make a pledge now.

You can visit St. Baldrick’s to find other area events. Maybe you want to shave your head?