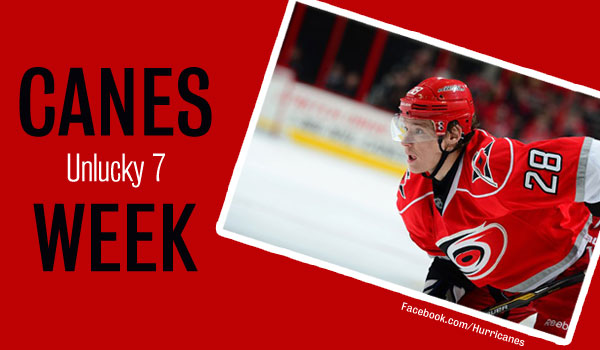 Cary, NC – The Carolina Hurricanes had a tough week, losing to Winnipeg and Toronto before breaking a seven game losing streak with a 3-1 win over the Jets on Saturday.

The Canes lost to Winnipeg on Tuesday at the PNC Arena 4-1 that was a back-breaker in many ways.

As all inter-divisional games are, it was a ‘4 point’ game as the Canes were 6 points behind the Jets.  If the Canes won, they would have been 4 points behind, and with 3 games in hand, been in a decent position to battle the Jets for the top position.

With the loss, they were 8 points behind and even if they won all 3 games in hand, still would not be able to catch the Jets.

The Canes started the Tuesday game strong with Juri Tlusty putting the Canes up 1-0 on a nice snap wrister off a pass from behind the net from Riley Nash.  After that it was all Winnipeg.  The Canes just couldn’t get things going.

There were new combinations on the forward lines.  Jordan Staal centered Jeff Skinner and Chad LaRose and was as weak of a performance a second line has had for the Canes this season.

The top two lines have to be scoring threats on every shift.  Skinner is extremely talented and as stong a skater as the Canes have, but he appeared to play very timid. The Jets were either double teaming Skinner or Staal on nearly every shift.

LaRose was playing his first game back after missing several due to a concussion.  Turns out LaRose missed the next game on Thursday due to the flu and whether it was effects of the concussion or the beginning of the flu, it wasn’t the LaRose of old.

On Thursday the Canes started their Canadian road tip with a 6-3 loss to the Toronto Maple Leafs.

The Leafs are one of the most improved teams in the east this season but the Canes usually have success finding a way to win.  Thursday was an ugly game.

The Leafs started out strong with offensive pressure from the opening drop of the puck.  The Canes had problems clearing the puck out of their zone with the puck eventually getting to All Star Phil Kessel.  Kessel reminds me of former Cane Ray Whitney as both very skilled stick handlers, make excellent passes and have more shots in their arsenals than most players.  Kessel had the puck on the low side of the left face off circle and frond Tyler Bozak cutting in from the left point, surprisingly beating Jordan Staal for the puck, snapping the puck in a wide open left side of the net to put the Leafs up 1-0.

The Canes only got 7 shots in the period with some of them weak as the Leafs did an excellent defensive job.

The Canes appear to have a life in the second period.  Captain Eric Staal scored his franchise leading 14th shorthanded goal while Ruutu was in the box for a horrible interference call. Scoring shorthanded maybe hockey justice.

A few minutes later Alex Semin scored a laser of a goal on a powerplay.  The biggest surprise of the season for the Canes has to be their power play.  They rank 29th out of the 30 NHL teams but have the talent to be in the top 3. If the powerplay gets on track, the Canes will make the playoffs and go deep.

JStaal scored early in the third to put the Canes up 3-2 but then the bottom fell out.  The Canes couldn’t protect the lead as the Leafs scored twice in a 2 minute span late in the period. The Canes pulled goalie Justin Peters but the Leafs put 2 empty netters in to give the lop-side looking 6-3 win.

The Canes dug deep and bounced back with a solid 3-1 win over the Jets Saturday March 29 finally breaking that unlucky 7 losing streak.

The top line of EStaal, Semin and Tlusty played very well as did the second line of JStaal, Skinner and Pat Dwyer and third line of Riley Nash, Ruutu and Jussi Jokenin.

Semin opened the scoring early in the first after a long first shift.  EStaal was tripped behind the net for a no-call but got up and used his strength to keep the puck.  Staal tried one of his signature wraparounds but Ondrej Pavelec made the save. Ruutu pounced on the rebound and got a shot off but was blocked by a skate, Semin was tied up but somehow got to the puck and directed in behind Pavelec for the early lead.

Midway in the first, it was the Finland Connection.  Ruutu picked up the puck behind the Jets goal line, skated to the near boards then threaded a cross-ice pass to Joni Pitkanen.  Pitkanen waited for a clear shot or pass, saw Jokinen at the opposite faceoff circle then passed back across the grain where Jokinen put the put in the net with authority.  Jokinen cleared waivers earlier this week so this goal meant as much to him personally as it did for the team.

EStaal opened the third with a goal that somehow found its way into the net.  Pitakanen sent the puck along the boards from the left side.  Semin won the puck from a Jet then passed to Staal.  Staal has the shooters mentality and shot into a mass of bodies from about 15’ out.  Somehow after pinballing off several bodies, the puck went into the net with Staal celebrating with the knowledge of how big that goal was giving the Canes a solid 3-1 lead.

The rest of the period was solid hockey by both teams.  The Jets pulled their goalie at the end but the Canes successfully held off the 6 skaters to finally break the 7 game losing streak.

Next stop is the most improved team in the east if not all hockey this season: the Montreal Canadiens.  It’s time for a winning streak.

Movie Review: Oz The Great and Powerful
Scroll to top