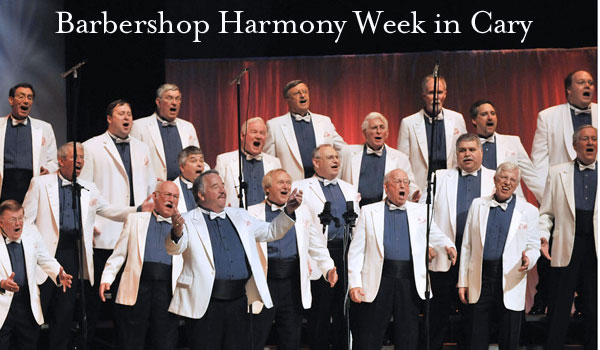 Story and photos from General Assembly Chorus in Cary.

Cary, NC – In recognition of the 75th anniversary of the founding of the Society for the Preservation and Encouragement of Barber Shop Quartet Singing in America, Inc. (SPEBSQSA), Cary Mayor Harold Weinbrecht has declared the week of April 7 – 13, 2013, Barbershop Harmony Week.

Barbershop Harmony, which originated and grew to popularity in late 19th and early 20th century America, is one of only two uniquely American musical art forms, the other being Jazz.  The SPEBSQSA, now known as The Barbershop Harmony Society, was founded on April 11, 1938 in Tulsa, Oklahoma.

The week will be highlighted in Cary on Saturday April 13 by Harmony, Hope & Healing, the fourth annual Pretty in Pink benefit concert by the General Assembly Chorus.  With performances at 2:00 PM and 7:30 PM at Cary Academy, 1500 Harrison Ave, Cary, proceeds will go to Pretty in Pink Foundation a North Carolina non-profit, founded here in the Triangle.

Pretty in Pink Foundation provides for treatment to people who have been diagnosed with breast cancer but who are uninsured or underinsured and unable to afford the expensive treatments required.