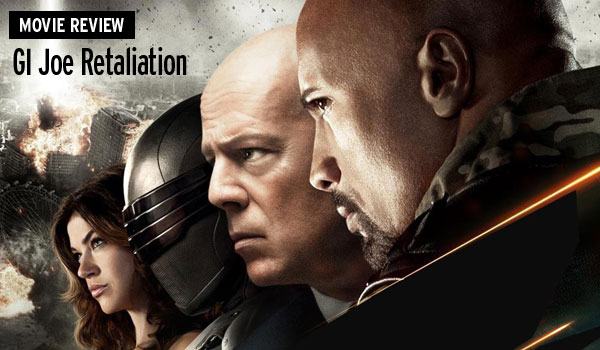 Review by Jordan Hunt for CaryCitizen.

Cary, NC – Before I delve into my actual review of G.I. Joe: Retaliation, I feel as though I should come clean about something. I am a huge fan of both Dwayne “The Rock” Johnson and Bruce Willis.

The “Rock” Next Great Action Star

Even though he’s been on screen for over 10 years, it feels like only now that Johnson is finally living up to the promise as our next great action star.

He’s had some questionable choices in those years, but no matter the quality of the movie, Johnson has always proved himself capable. I mean, the man just oozes charisma. His addition to the action sequel Fast Five almost single-handedly drove that film to record grosses and proved once and for all that he is a bonafide action star.

Plenty of Action, But…

So you can imagine my grave disappointment when I found out that G.I. Joe: Retaliation simply fails to deliver even one truly exciting action sequence.

Now don’t get me wrong, there is plenty of action in this movie. But none of it is particularly compelling. In fact, in terms of huge blockbuster filmmaking, Retaliation feels fairly small.

An action blockbuster like this should have spectacle to spare, with a fast pace that doesn’t allow the audience to even once think about logic but just enjoy the explosions. But Retaliation only delivers decently shot action sequences that we’ve seen a million times before and usually done quite a bit better.

The biggest letdown has got to be the complete waste of a potentially awesome action filled cast. As I mentioned previously, the film stars Dwayne “The Rock” Johnson and Bruce Willis as well as Channing Tatum. Tatum, who had a big year in 2012 with hits like Magic Mike, The Vow and 21 Jump Street, also starred in this films predecessor G.I. Joe: Rise of Cobra and is actually one of the only cast members of that film to return for the sequel. Unfortunately, he only pops up for about 15 minutes, which is a real shame because he has really become confident as an actor and could have added a big dose of fun to the proceedings.

Oh, and Bruce Willis only has about 5 minutes of screen time. You get one of the biggest action stars of all time and then barely use him? How dare you!

The only real bright spot of the film for me was The Rock himself. What can I say? The man is just fun to watch onscreen. He knows exactly what kind of movie he is in and puts his all into every action sequence and cheesy one-liners. It’s just a shame the filmmakers couldn’t match his enthusiasm.

Not Worth The Price of Admission

If you’re a dad looking for something to watch with your teenage son or vice versa and you have the absolute worst urge to see some action on the big screen, you could do worse than G.I. Joe: Retaliation. You could do a lot better too, though. I say stay home and put something like Die Hard or Fast Five on and get your dose of quality action flicks that way.