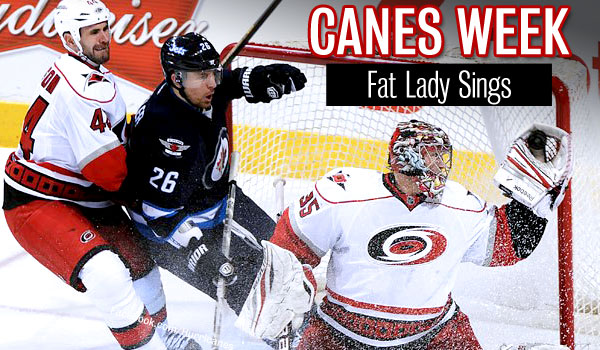 Story by Bob Fennel for CaryCitizen.com Photo from Carolina Hurricanes on Facebook.

Raleigh, NC – Starting with Thursday’s game against Winnipeg, the Carolina Hurricanes needed to win all remaining games in regulation.  Coming close, they lost in overtime 4-3.  They started the week with an impressive win over the Boston Bruins 4-2, but lost Tuesday night in Ottawa 3-2.

No Playoffs This Year

With the OT loss, the Canes are mathematically eliminated from the playoffs. A major crash from 6 weeks ago when they were ranked 3rd in the east.

The Canes earned the victory over the Bruins while the Bruins’ top two scorers were out.  The Canes were missing Ward, Joni Pitkanen, Tim Wallace and Tim Brent.

Many of the Canes, as with players on other teams, aren’t 100% and it shows in their play.  Maybe during a normal season, those non-100% players take an extra game or two to get fully recovered.

The Bruins struck first in the game when the Canes not only didn’t clear the crease,  but allowed Milan Lucic  to freely skated in front of Justin Peters for a tip in off a shot from the left point.

The Bruins used their size a strength to man handle the Canes most of the game, something the Canes may address during the offseason.

Late in the first, the Canes tied the score with the powerplay that appears to have finally hit its stride.  There was good puck movement up top between Marc Andre Bergeron, Justin Faulk and Alex Semin.  Semin took a shot from the right face off circle that Bruin goalie Rask couldn’t control.  Jeff Skinner was camped out to the side of the net and did a pure skill move, lifting the puck to bounce off Rask’s back into the goal.

In the second period, Justin Peters made what turned out to be the #1 save of the week in the NHL and probably will be the save of his career.  With the Bruins on a powerplay, the Bruins had the puck and kept inching closer to the goal with the Canes defense backing up instead of attacking the puck.  David Krekci had the puck in the right faceoff circle with all the time in the world just deciding whom to pass to for a score. With all of the attention on the right side, Kerkci passed to Jaromir Jagr who was left all alone to Peters’ left.  Jagr had the whole goal open and one timed the puck but Peters somehow dove across and made an unbelievable save an inch in front of the goal.  Jagr turned around in disbelief as he missed out on adding to his 680 NHL career goals.

Jiri Tlusty added to his team-leading goal count late in the second on a nice feed from Eric Staal. The Canes kept the puck moving on the perimeter, with Tim Gleason sending the puck from the left point to behind the net to EStaal. Staal controlled the puck then passed out to Tlusty whose quick shot probably surprised Rask.

Joe Corvo added another powerplay goal midway in the third to give the Canes a late 3-2 lead.  The game was exciting for the fans as the first period had 3 major fights including one between sequoia Zdeno Chara and Jay Harrison.

Tlusty added an empty netter to seal the Canes longest winning streak at one game since early March.

The Canes had a respectable game against Ottawa but again fell short on a game they could have won.

Early in the game Peters was in excellent position well out of the crease and made an impressive glove save.  Classy Daniel Alfredsson was parked to Peters’ left and tapped Peters pads telling him ‘nice save’.

Ottawa started off the scoring with one late in the first and another early in the second giving the Canes another uphill battle.  Battle back they did as EStaal gave Faulk another great pass with Faulk taking a quick wrist shot that got past Craig Anderson.

Later in the game Anderson stopped a sure goal from his hometown buddy, Joe Corvo, that will cost Corvo dinner, drinks and dessert for a few months.

EStaal kept the Canes powerplay mojo going when he added his 17th goal in the third.

The Canes had chances to tie the game as they had a very good third period but wound up losing 3-2.

The loss in Winnipeg in overtime was a back breaker as they fought so hard as they knew what was on the line.  Any type of loss would end any hope of post season play.

For the second game in a row, the Canes were in a 2 goal hole before the game was half over.  Tuomo Ruutu had a goal called back in the previous game and was determined to make something happen this game.  Shortly after the Jets scored their second goal, Ruutu got a pass in the high slot then made 2 very good moves then shot across the grain hitting the pipe sending in his first of the season.

Another headman pass along with a defensive breakdown allowed Blake Wheeler to go in on Peters for a commanding 3-1 lead. Ruuto was having his best game of the season, not just because he scored earlier but was skating better than most Canes, finishing his checks and creating traffic in front of the Jet’s net.

It was that traffic that led to his second goal of the night. Jordan Staal passed up to Marc Andre Bergeron at the center of the blue line.  Bergeron let fly a slap shot that Ruutu got a stick on for a tip in.

In the last minute and half of the game, the Canes pulled Peters for the extra skater.  In addition to the first line, Coach Kirk Mueller put JStaal out there for size and skill.  JStaal muscled his way for the puck then passed over to Tlusty.  Semin was paying the price in front of the net getting cross checked with typical late game no-calls but managed to send a shot high to tie the game giving the Canes hope.

A little over a minute into overtime, the Jets cleared the puck from their end and had a 2-on-1 with Corvo back.  Peters made the initial save but gave up a sweet rebound right to Dustin Byfuglien’s stick for an easy goal, killing the Canes post season hopes.