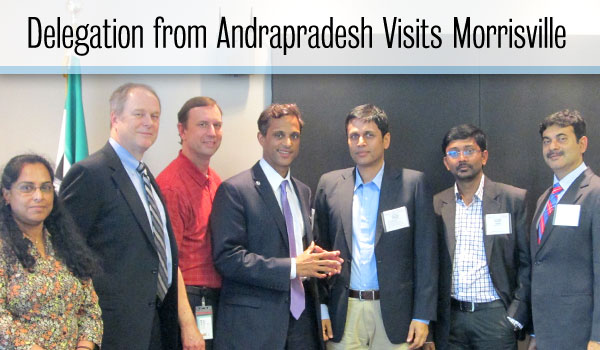 Morrisville, NC – A delegation from the Indian state of Andrapradesh visited the Triangle last week to discuss investment in biotech and pharma.

Last Thursday, Morrisville Councilmember Steve Rao hosted a delegation from Andrapradesh, the largest biotech and pharma state in India, at Fuji Film Diosynth in Morrisville. The delegation discussed how they are working with US companies to help them expand presence in the Indian market through their Genome Valley Park, a global biotech park in their state.

Earlier in the day, Rao and the delegation visited the NC State Centennial Campus, NC Biomanufacturing Education and Training Center, and the NC Biotechnology Center, where there was a lunch with biotech and pharma executives.

Rao and Dr. Rajat Gupta, Commisioner of Indusries and Commerce for the state of Andrapradesh, have identified establishing a regional partnership between Andrapradesh and the Triangle, focusing on Indian multinationals investing and creating jobs, while at the same time increasng access to a multibillion biotech and pharma market in India.

“I see next steps to come from this visit. This is yet another example of how we can leverage our growing diversity, to establish parenterships to advance our economic growth and extend our brand to the rest of the world,” said Rao.